The mech fighter Daemon X Machina is getting some DLC. This content may be familiar to some fans, as the designer of DxM Shōji Kawamori also designed the source material of which this content is based on. The Daemon X Machina DLC is a cosmetic crossover with the anime Eureka Seven. Players will be able to reskin their mech and pilot as Nirvash TypeZERO and its pilot Renton Thurston. Renton’s clothing can be swapped to replace the default suit and his hair can also be equipped. The Nirvash skin does not have any extra parts or equipment for the mech, just a cosmetic difference. 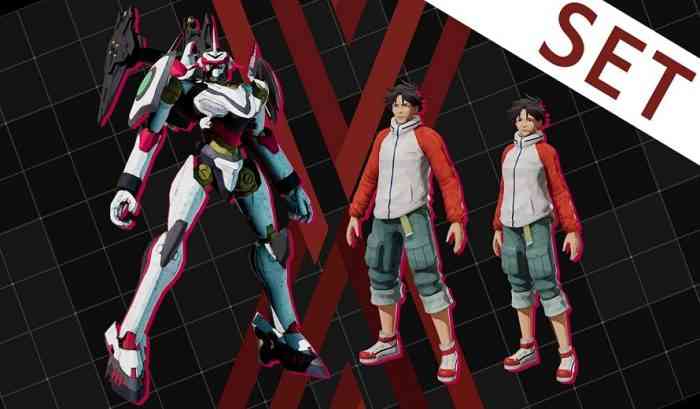 Euerka Seven is an anime that features mechs called LFOs that use high tech surfboard and ride on waves in the sky called Trapar waves. There are many LFOs in the series, the Nirvash TypeZERO being the main one. Other notable characters include the Nirvash’s other pilot Eureka and the TypeTheEND pilot Anemone. Unfortunately, both of them and Anemone’s LFO are absent from the DLC.

Though the content is strictly cosmetic and offers no gameplay bonus, it is entirely free for players to download. Fans are hoping that this collaboration DLC will open up doors into other collaborations with franchises that feature similar mechs. Other DLC options for DxM that are paid include pilot customization faces and hair, emotes, as well as mech paint jobs and armour decals. The Eureka Seven DLC is available now for Daemon X Machina players. Daemon X Machina is available on Nintendo Switch.

What other crossovers would you like to see? Let us know in the comments below.