And You Thought The Dating Sims Were Weird

First we had the KFC Dating Sim, and we all thought that was pretty out there. Excessive work, for a marketing stunt. Then, Wendy’s put a tabletop RPG called Feast of Legends and apparently there is no amount of work that’s too much for something like this. 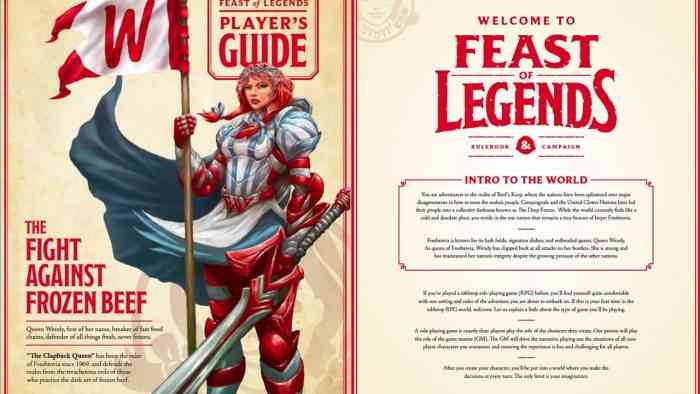 To be fair, we’ve had fast food video games in the past. Burger King put out a stealth game back in the day, plus there have been first person shooters and platformers and whatnot. But a tabletop RPG? That’s a new one, surely. Yes it’s out now, yes it’s free, and yes it’s a 97-page PDF?

There are character classes to choose from, abilities and spells to master, and bonuses from eating Wendy’s food while playing. The story involves a valiant quest to defeat like, frozen beef and all of its evil minions. Look, it’s legally distinct from McDonald’s, but the United Clown Nation is one thousand percent Mickey D’s in all the relevant ways. The best part is, you can absolutely go on a quest to kick fantasy Ronald’s ass right this second. You can get the PDF here, which includes some shockingly detailed concept art.