So, You Want to Hunt Loot…

You can lead a viewer to a stream, but you can’t make them interact. Everyone knows that saying, right? Well, Gearbox is doing everything they can to make engaging in a stream as easy as possible in Borderlands 3. Something new to the series in this game is the ECHOcast Twitch Extension. It might be a little daunting to get involved with at first, but thanks to the ECHOcast Twitch Extension Guide that Gearbox has released, scooping up loot has never been easier. Well, maybe for the streamer. If you are new to this feature, you might want to check out how it works. 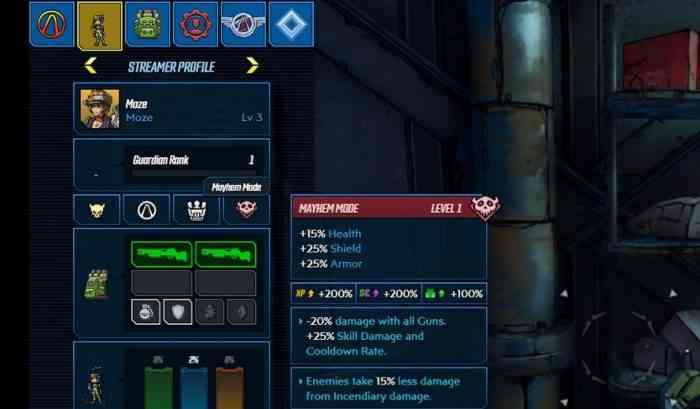 One of the biggest incentives for enabling the ECHOcast Twitch Extension for a viewer is the prospect of getting some dope loot when the streamer opens a red chest. It’s not just a loot-vacuum, however, and there are a bunch of other reasons to enable it. If you are a loot enthusiast, or a enlootiast as nobody calls them, you will enjoy the Streamer Profile. It is basically a real-time look at the streamer’s ECHO. It shows their current load out, inventory, skill build, Guardian Ranks, as well as their currencies like Golden Keys, Cash, and Eridium Shards. It also gives other details like how much damage they have dealt, how many times they’ve been downed, and other stats that I don’t believe players even have on themselves.

Sometimes part of the entertainment of a stream is watching the streamer overcome or not overcome challenges. During certain events, the chat can power up regular enemies into Badass enemies. They can give these powerhouses bonus buffs like double damage and regen factors. Another way the chat can influence the game is through Piñata Events. They can choose to fill it with cool loot or somethings that are not so friendly and cool. You can read in detail what the ECHOcast Twitch Extension has to offer in Gearbox’s news blog.

Have you tried out the ECHOcast Twitch Extension as a viewer or streamer? Let us know in the comments below.