We all know that the Witcher series is expanding its brand. First as a book, then a video game, now a TV series. Having had our first look of it from the teaser back in July, all we could do is wait for it. Yesterday, it would seem that we caught a glimpse at just how long a wait we are in for. The official Netflix Facebook page posted a “# of sleeps until” status for a bunch of Netflix titles. Most of them were reminders of already announced dates, but the Witcher Netflix show was accidentally included it seems, as we have not been given an official release date. 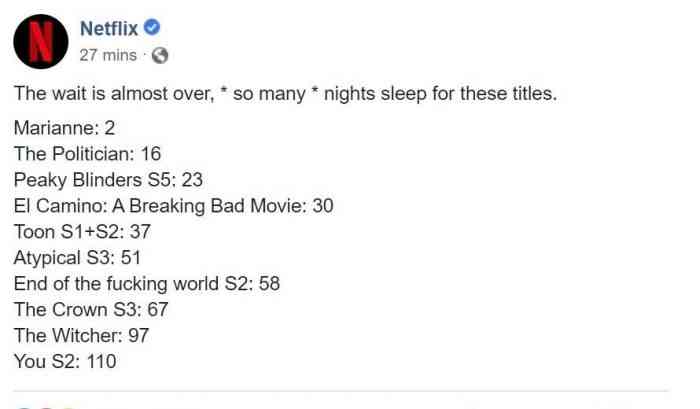 The post, which has since been deleted, clocked The Witcher at 97 days until release. If this is true, today would make it 96 days from release and December 17th is 96 days away. Around May, there were rumors that The Witcher would premier on December 20th, so with those two dates in the same ballpark, it is very believable that we will see The Witcher around this time.

Other titles on in the Facebook post included Marianne, which premiers tomorrow, the Breaking Bad movie, Atypical, The Crown, and others. We probably only have to wait a little longer to see if this delete post is the fo’ real real or not. In other Witcher news, The Witcher 3’s Switch release is gaining as much skepticism as it is gaining hype. The Witcher Netflix series comes out later this year… probably.

Are you excited for the show? Let us know in the comments below.