Got Some Asgardian Grooming Done

When we got our first look at Marvel’s Avengers during E3, we were like “Yay!”, but also like “Hmmmm.” On one hand, the game looks great; we will finally get to play as our favourite Avengers in their own style and really feel like a superhero. On the other hand, some of the heroes looked a little off; for me personally, Black Widow looked like she was wearing a wig, Captain America’s hairline was too high, and his armour looked weird. Cyrstal Dynamics has since altered some of their looks slightly, and now Marvel’s Avengers Thor has a new look as well. 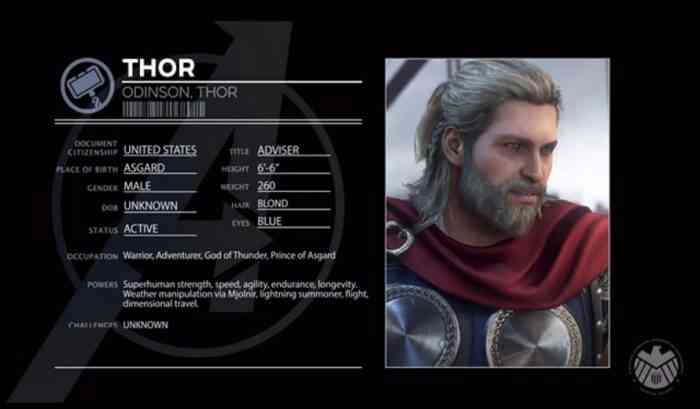 Now, it’s not “new” new, but it’s different than how he appeared in the gameplay demo. His armour is the same, with the chest pieces a little bigger than we’re used to seeing in the MCU and the cape being more of a wrap-around cloak, but he got his hair did. Instead of looking like the guy you might not sit next to on the subway, he looks more like a barista that could also double as a bouncer. It’s the hairstyle Chris Hemsworth had in Thor: Dark World and Avengers: Age of Ultron. This new hairdo might just be the look for Thor after the time-jump, after the A-Day prologue.

The God of Thunder, Thor flies in for his very own Hero Week! People of Midgard, behold his mighty strength, his glorious lightning strikes, and his unmatched ability to make the snidest of comments. pic.twitter.com/R53WLrWdqB

This new look is brought to us in the new Character Profile for Thor that had been tweeted out yesterday. Hulk and Captain America had similar profiles. As with the previous Character Profiles, Thor is given an alternate skin, which had been partially leaked. At the time of the leak, your ol’ pal Zane thought this alternate skin was the costume in the 1988 TV movie The Incredible Hulk Returns, but with a better look, it is closer to the classic Thor costume with the iconic Asgardian helmet, but with a pelt around his shoulders. Marvel’s Avengers will be out on May 15th, 2020 on PC, PS4, Xbox One, and Google Stadia.

Do you like Thor’s new look? Let us know in the comments below.

Marvel’s Avengers – The Mighty Thor Is Mighty Stale
Next
The Last of Us Part II is 50% Bigger Than the Original
Previous
Upcoming Minecraft Updates Include Character Creation and New Enemies; New Co-op Game Coming in 2020