One of Gaming’s Most Mysterious Holes

As far as holes are concerned, the best ones are the Shia LaBeouf movie, the Courtney Love band, then this one in Sea of Thieves. It appeared in the new Sea of Thieves Black Powder Stashes update that went live two days ago. Environmental storytelling is becoming the standard of online multiplayer games. Black Ops 4’s Blackout has started doing it, but no one uses it like Fortnite. It appears that Sea of Thieves is trying their hand at environmental storytelling, and while it may not be a giant mech in a volcano, considering the game is about a bunch of pirates, you can see why a mysterious hole would fascinate them. 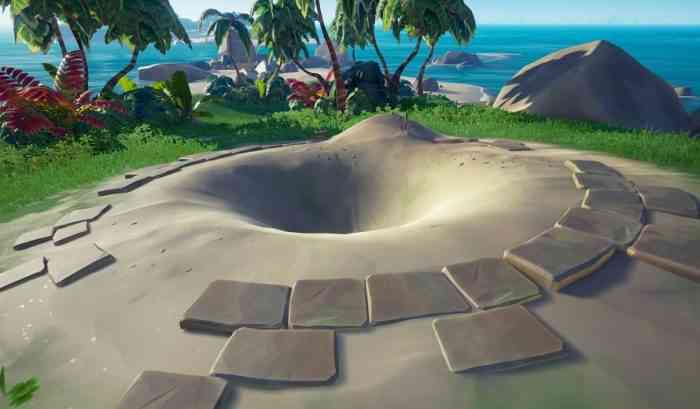 While most updates will come with a changelog, players will still scour the game to look for little changes or additions after a major update like Black Powder Stashes. Some players found a big hole on an island unofficially called Killer Whale Island. The island is located where the map coordinates of I-12 and J-12 meet. It is claimed that this hole is new to the update, but even if it isn’t, there appears to be no function to it yet. Players have tried digging in it, filling it with buckets of water, but no changes.

As mentioned above, there may not be anything special about his hole right now. Players who have unsuccessfully looked for answers as to why it is there are speculating that it has something to do with the next monthly update Dark Relics. The island is nicknamed Killer Whale Island because of the ship that has been wrecked there called The Killer Whale. Maybe there is some history to the ship that will be revealed in that hole, just not right now.

Do you think there is anything special about this hole, or did I just waste an hour looking digging up info on it (no pun intended)?