Up until now, almost all the controllers, both official and custom, accompanying a new Gears of War game have been Locust themed. They are after all, the enemy and most interesting species in the series. However, it looks like Microsoft is going is taking a look at the other side of the Locust war for controller inspiration. According to a couple of leaked images, the Xbox One Gears 5 controller will be COG themed. That being said, the Locust are still more interesting than the human army or Sera. 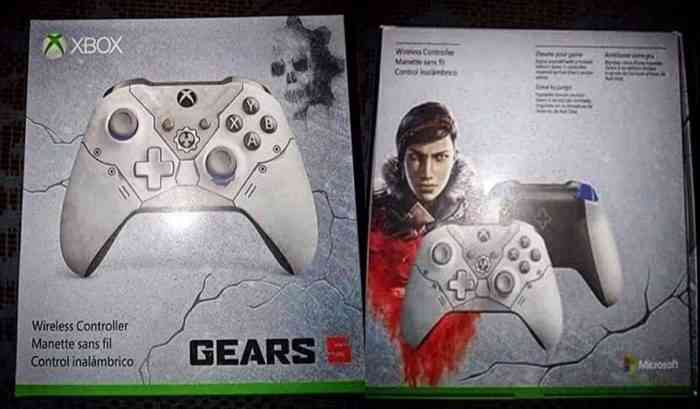 In the past, Gears of War controllers have usually been painted a combination of red and black. They have had the classic Gears symbol the Crimson Omen, and often had other battle-worn scratches and blood stains. An apparent leaked image of the Gears 5 controller will be inspired by the Coalition of Ordered Governments, the human faction. Like the human’s colour pallet, this controller has very muted and neutral colours like white, and grey, and… white-ish grey. The triggers have some blue on them, but that’s about it. There are two COG symbols; one on the battery pack, and one between the View and Menu buttons. It probably would have looked cooler for the COG symbol to be in place of the Xbox button, but you know, brand recognition.

The image was posted on Twitter by the user @IdleSloth1984 and it looks pretty legit, but until we see something official from Microsoft, this could just be a very well done fake. By the look of the replies and retweets, a lot of fans are hoping that it is fake, as in they are not very happy with the look. To be fair, how many times can Microsoft do the same Locust theme in different ways on their controllers. Good on them for trying to mix it up. Gears 5 will be out on September 10 on Xbox One and PC.

Do you like the supposed look of this controller? Let us know in the comments below.

The Medium Custom Controllers Being Sent Out By Bloober Team

Big Leak of Upcoming Gear 5 Skins For Weapons and Characters
Next
Ubisoft Reveals Character Leveling and DeadSec Progression for Watch Dogs: Legion
Previous
Re-Energize Your Gaming Rig with the Best PC Games and Accessories Deals of the Weekend