One of the many great things about the Final Fantasy series is how pleasing it is to the ears. Chances are even if you have not played a lot of the games, there are still a bunch of catchy tunes you know from some of them. Now, they are finally all in one place, most of them at least. A ton of Final Fantasy music is now on Spotify for your listening convenience. You finally have the perfect music for which to fight your boss, I mean A boss. Don’t get any bad ideas. 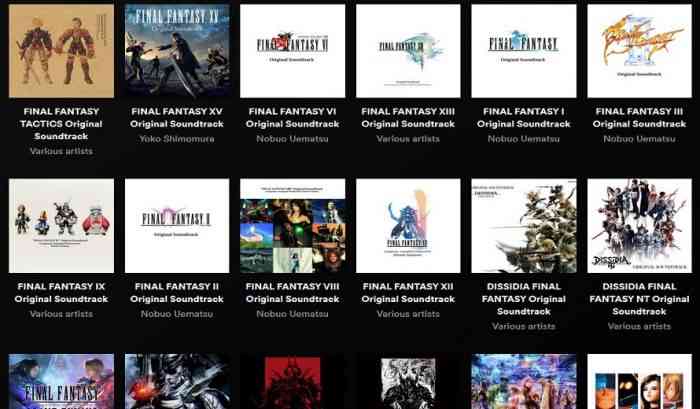 Just open up Spotify and search “Final Fantasy Original Soundtrack” and boom! Music from all 15 original games as well as the Dissidia and Tactics games. Even soundtracks from the sequels like XIII-2 and spin-offs like Crisis Core are there. While not all the battle themes are that easy to identify while playing the game, at least you can now sort through them and pick out the ones you recognize. What makes that difficult for most people is that pretty much all the titles are in Japanese. Though, finding specific songs might be a time consuming ordeal, if you just want some dope background music, these soundtracks are great.

What are some of your favourite Final Fantasy tracks? Let us know in the comments below.

Outrider’s Spotlight – Everything We Know About the Pyromancer Class
Next
StarCraft First Person Shooter Has Been Canceled By Blizzard So They Can Work On Other Projects
Previous
How Long Will the Call of Duty Modern Warfare Campaign Be?