Hasbro is the place where your childhood and man-childhood collide. Your love of videogames and toys come together again. The newest Overwatch Nerf gun to be produced is Soldier 76’s Heavy Pulse Rifle. As with many of the Overwatch weapons, this one’s cartoon-ish, over the top design lends very well to the Hasbro Nerf line. Set apart from some of the Overwatch-inspired light blasters, this one looks very much like the in-game model. It is painted white, grey, blue, and orange, Soldier 76’s signature colours. Though there is no orange on the gun in the game, it still matches his colour pallet. Orange is usually required by toy and replica guns to easily identify from real ones. 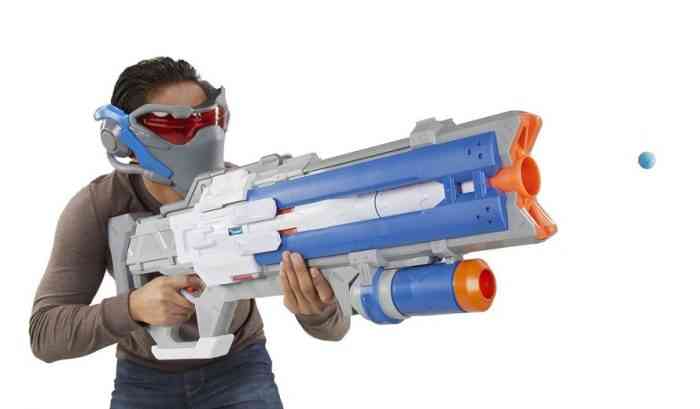 Hasbro really went above and beyond with this one. It has an internal hopper to load the rounds (each round is a ball. I feel uncomfortable saying “load the balls”). It also has a motor that, when revved up, will fire each round at 90 feet per second! It even lights up on the sides and on the digital, not-real scope. That kind of tech requires some serious power, 6 D cell batteries to be exact. That will add some weight to the blaster, trust me. You do not want to have a snowball fight with D batteries with your brother.

To complete the look of Soldier 76, the Nerf gun comes with his Tactical Visor as well. It doesn’t look half bad either. It’s big and bulky, but the details are all there. You’ll want to let whoever you’re shooting at wear it though. Here comes the hurt: $130 USD. Also, it will be sold exclusively at GameStop. The Soldier 76 Heavy Pulse Rifle Nerf gun will be available for purchase in November.

Price aside, do you like the make of the Pulse Rifle? Let us know in the comments below.

More Than 74,000 World of Warcraft Accounts Have Been Banned by Blizzard