Players Can Earn More Loot in the Black Ops 4 Contracts

Hey, who’s excited to Modern Warfare? Well, unfortunately you will just have to be patient for another four months. Until then, all you have is Black Ops 4 to sate your Call of Duty fix. Not a bad use of your time with the new update now live. Players now have a way to increase progression rate as well as get more loot with Black Ops 4 Contracts. Complete specific challenges and get rewarded for them. Simple. If you have played a FPS before, Contracts is a pretty familiar concept. In fact, Black Ops 3 had Contracts and WWII had Orders. 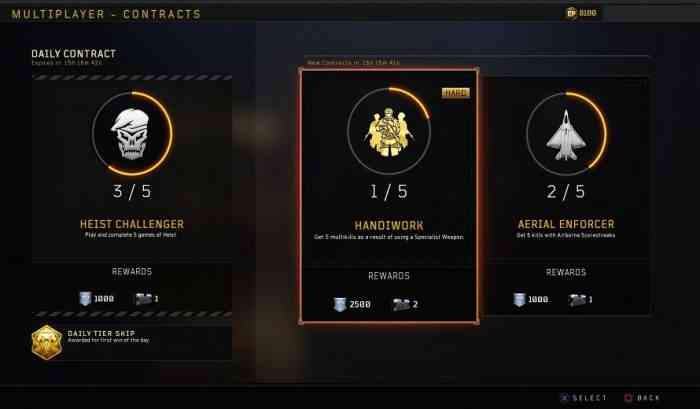 Of course, Contracts is not just copied and pasted from previous games. It now has an extra level of challenge for the COD-MLG-Headshot-DudePros, and for those who just want to get better. The way Contracts works is that there is a global Contract as well as 6 additional ones per gamemode everyday. With four game modes, that gives a potential of 28 daily Contracts. Regular Contracts earn about 1000 xp each, while Hard ones grant around 2500 xp each. Either difficulty can get players a Reserve Crate, which is basically a loot box, but Hard Contracts are more likely to yield a crate.

It appears that the global Contract can be completed anytime within the specified gamemode. The additional 6 can only be completed two at a time; once one is done, claim your loot and choose a new one. The four gamemodes to complete these Contracts in are Blackout, League Play, Multiplayer, and Zombies. Contracts went live two days ago.

Is improving Black Ops 4 a dead end now that Modern Warfare is on the horizon? Let us know in the comments below.