She’s Been Asking Since Launch…

D.Va’s famous line “Nerf this!” has finally been heard. Nerf has already made for toy blasters for D.Va, Tracer, and Torbjörn. Early in 2019, fans will be able to add to their collection with a D.Va Lightgun, McCree Peacekeeper, and Reaper Hellfire Shotgun blasters. These new additions are part of the Nerf Rival Overwatch line. While the new blasters haven’t hit the shelves yet, Hasbro has sent them ahead to various news outlets, such as Digital Trends, to try them out themselves. 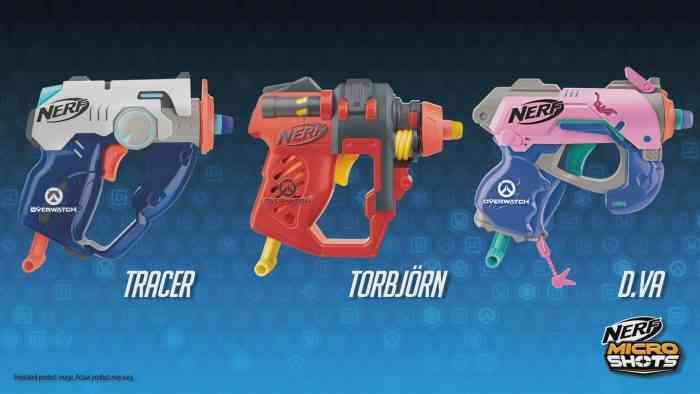 It is unclear if these blasters are available right now. Digital Trend reports that they will be available in January and Hasbro’s online shop doesn’t seem to have them. However, they appear to be available for purchase on GameStop’s online store and have user reviews up. Speaking of reviews, Digital Trend did have some fun with the blasters and they had somethings to say about them.

Is it Worth the Dosh?

The three blasters for Torbjörn, Tracer, and D.Va are part of the Nerf MicroShot collection. These particular items are “functionally identical” meaning they work the same, have similar range design. They are about $10 a pop, and their performance reflects the price. They work, but not at an outstanding level. The D.Va Lightgun, which looks closer to the digital counterpart than the MicroShot, performs much better. It holds three shots, as opposed to the MicroShot’s one, and has decent range and a bit of kick. It also comes with a cute wittle bunny wabbit charm hanging from the grip. This one is about $30.

McCree’s Peacekeeper looks almost identical to the gun used in the game. Biggest downside: single shot. What kind of revolver has one shot? This is a war on High Noon! It also does not fire as far or as accurately as the D.Va Lightgun. The Peacekeeper is $40, which is kind of a miss, but hey, it looks cool.

The Hellfire Shotguns are badass. Each package comes with two blasters, à la Reaper’s style, which both hold and fire eight rounds in a single shot. They emulate shotguns, so it makes sense. They are accompanied by Reaper a facemask, which surprisingly isn’t a major detriment to your aim. Digital Trend calls the Hellfire Shotguns “the most functional set of the three, by a significant margin”. They are also the most expensive “by a significant margin” at $130.

The conclusion Digital Trend comes to is that they are definitely nice to have for cosplaying or for collecting, but a far as firing them, there are better options out there. I’m not sure what they mean by that. Is there like competitive Nerf-ing? Is that a thing? Anyway, what’s your opinion on them? Are they cool replicas? Waste of money? Let us know in the comments.

Nerf Is Releasing a Replica of League of Legends’ Jinx’s Rocket Launcher
Next
Head of Sonic Team Would Totally Remake Sonic Adventure
Previous
Analyst Michael Pachter Calls Sony out for Skipping E3 2019, Says They’re Fools to Do So