It Costs an AVALANCHE of Cash

For the past ever-since-I-can-remember, fans have been perpetually dying to get their hands on the Final Fantasy VII Remake. Now that the end of our wait is in sight, we can look at what kind of options we have in terms of pre-orders and editions. There have been fake and pre-mature listings of pre-orders, but now we can see the Final Fantasy VII Remake Collector’s Edition and everything that comes with it. In total there are three options for pre-orders; the Standard Edition, Deluxe Edition, and 1st Class Edition, which is a nod the the SOLDIER 1st Class rank that Sephiroth and Zack held. 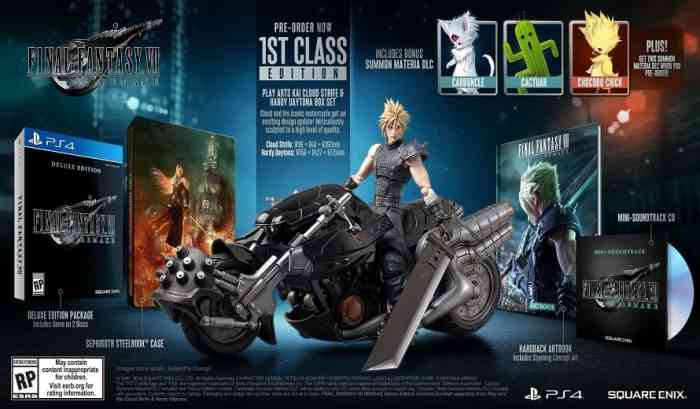 The Standard Edition is just the base game, but it comes with the in-game Chocobo Chick summon Materia. All pre-orders come with that Materia. The Deluxe Edition is where the cool stuff gets added. It comes with the game, the Sephiroth Steelbook case, a mini-soundtrack CD, an art book, and the Chocobo Chick and Cactaur summon Materia. All this is packaged in a nice box set. The Standard and Deluxe Editions cost $59.99 and $79.99 USD respectively, but the 1st Class Edition really ramps up the price.

Clocked in at $329.99 USD, the Collector’s Edition comes with everything in the Deluxe package as well as a Carbuncle summon Materia and sweet Cloud Strife and Hardy Daytona figures. The figures come from Play Arts Kai which produce many high quality figurines for fans of various games. While this statues are badass and this is Final Fantasy VII we’re talking about, is the price really justified? Only hardcore collectors can really answer that. If you are a hardcore collector, you can pre-order this on Square Enix’s site. Final Fantasy VII Remake comes out on PS4 on March 3rd, 2020.

Is the Collector’s Edition really worth the gil? Let us know in the comments below.