John Wick Getting a More Official Inclusion in Fortnite

There is already a skin in Fortnite modeled after gun-fu master John Wick, but it looks like the character will be making an official entry to Battle Royale Island to promote the release of the third film later this week.

Evidence of the event was uncovered by known Fortnite leaker @Lucas7Yoshi, including the above pictures, along with a bunch of new text prompts related to John Wick dialogue. This comes a week after a Redditor noticed that Wick’s house popped up in Paradise Palms, sending dataminers on a scavenger hunt. The new, official John Wick skin will come with a ‘damaged’ variant, and the new Wick’s Bounty LTM sends players hunting down their opponents in an effort to collect the gold coins as seen in the films. If you get eliminated three times, you’re out for good, and players who amass a lot of coins will have their location marked on the map. 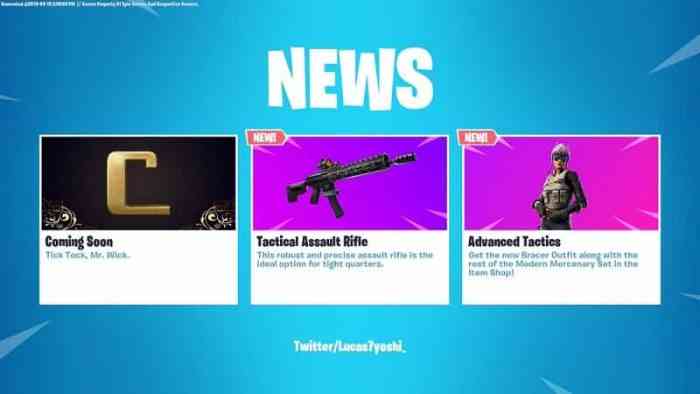 Just to add gas to the fire, the official Fortnite twitter shot out this tweet earlier today, after news of the leak started making the rounds:

On top of that, there’s now a news item live in the game’s hub screen that says “Tick Tock, Mr. Wick.” So I guess it’s just a matter of time before the LTM drops now.

This comes relatively soon after Fortnite’s last movie related LTM, which was another tie-in with the latest Avengers film, and shortly after the game’s 9th season kicked off. Additonally, John Wick is getting his own game soon from the creator of Thomas Was Alone.

Fortnite is currently available on PC, PS4, Xbox One, Nintendo Switch, and mobile devices, while John Wick 3: Parabellum drops this Friday, May 17th. Let us know if you’ll be returning to the life in the comments!


Epic Games Is Taking Apple to Court Over “Monopolistic Practices”