Fortnite Shares the Love With Players This Valentine’s Day

Seeing as there is a real-life holiday coming up shortly, it only makes sense that Fortnite would have an in-game celebration full of special rewards for players to unlock. 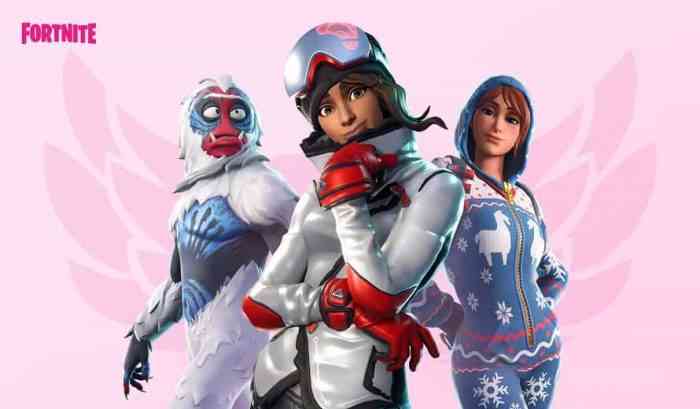 Fortnite’s “Share the Love” event kicks off tomorrow running until the 27th, and as is tradition, will come with a set of event exclusive challenges and rewards for players to complete and unlock. Those who take part in the game’s Support-a-Creator program will receive a free Cuddle Hearts Wrap, and the new Overtime Challenges will net players the Valentine Wrap and Vines contrail. Those with the Season 7 Battle Pass will be able to unlock new styles for the Trog, Powder, and Onesie outfits.

There’ll also be a new “Share the Love” Competitive Series, with placement matches running on February 9th and 10th, with top performers going straight into their appropriate higher divisions. Competition will be separated across four different divisions that will run simultaneously every day, starting with Open Division, moving into Prospect Division, then Contender Division, and finally, Champion Division. Players can unlock each new division by earning a pin during any daily session, with finals taking place on February 23rd and 24th. Also, each division will have their own special sprays related to the event.

A new “Featured Island Frenzy” event will also be taking place from February 12th to 22nd, with a rotating set of featured islands appearing in Fortnite Creative each day. There’s also going to be two double XP weekends leading up to the end of Season 5, on running from February 15th to 17th, and the other from the 22nd to the 24th.

Fortnite is currently available for just about everything under the sun including PC, PS4, Xbox One, Nintendo Switch, and mobile devices. The game recently held the first ever virtual concert to massive success, and Netflix has recently recognized it as their biggest competition. Let us know if you’ll be dropping in on Valentine’s Day in the comments!