Scratch that Burnout Itch with Some Dangerous Driving

Dangerous Driving, the upcoming Burnout successor from original creators Fiona Sperry and Alex Ward, has been given a release date of April 9th. The announcement was made today by Three Fields Entertainment. 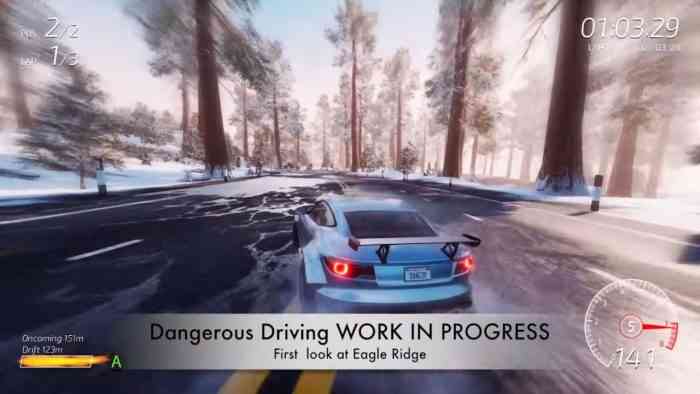 It’ll cost $30 USD/£25 and will be available as a digital download on PS4, Xbox One, and PC via the Epic Games Store. For those that love physical boxes, a retail version will also be available for $40 USD/£30 and will also include Danger Zone 2. Danger Zone 2, which released last year, focuses on crash testing, but instead of it being set in a virtual crash testing facility like in the original, it’ll now be set on real public outside roads.

Three Fields Entertainment also revealed that Dangerous Driving will include a total of 30 courses across seven different locations. Players will be able to unlock cars and abilities which can be earned by racing against other players online or offline against the computer AI.

There will also be eight different event types in Dangerous Driving, with many of them sounding similar to other fan favourite Burnout modes. In an old interview with IGN, Ward said that we will “see some Burnout 1 and Burnout 2 in there like Survival Mode, Pursuit Mode and Boost Chain Races — as well as stuff from B3 and Revenge like Road Rage and Races based around Takedowns.”

While you wait for April 9th to come, make sure you read our review for Danger Zone 2. Below is a brief snippet:

“Danger Zone 2 is a strong sequel to Danger Zone. Visually, the game is leaps and bounds above the original. It might not be an overly long game, but it still has some genuinely enjoyable moments and some of the challenges will take a lot of practice to complete. If you’re a fan of Danger Zone or those old Burnout games, then Danger Zone 2 is an easy recommendation.”

Are you looking forward to DD? Leave us a comment below.