The boundaries are a lie

The “Out of Bounds” Portal speedrun has been broken. The runner Can’t Even shaved off five seconds from his previous record. The last-best run they did ended at 7:12, which is more than eight seconds faster than the second place run. Speedrunning fans can view the Portal leaderboards, but it has not yet updated Can’t Even’s new record. The new 7:07 record can be viewed on Can’t Even’s YouTube channel. 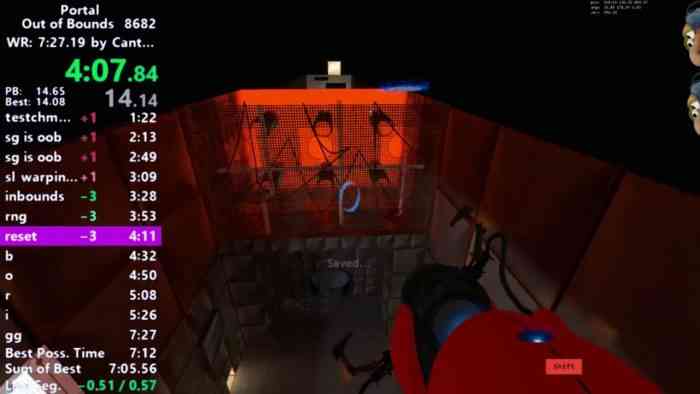 Can’t Even can be seen clipping through the walls of the game, firing portals through the void to new parts of the loaded levels. Seeing the run for the first time, it’s difficult to even understand what is happening for a while. Despite taking five seconds off their record, Can’t Even believes they can do it two seconds faster than that. This would give them an astounding ten second lead on the runner up.

You know what they say, “second is the best”

Speaking of the runner up, the runner known as Msushi, while is eight seconds behind Can’t Even, hold the records in all the other Portal categories. Inbounds, Glitchless, and Inbounds Legacy are the other categories Msushi has a lock on, though Can’t Even does have a spot on the Inbounds leaderboard, but it places them at 23rd. In the Inbounds and Glitchless categories, Msushi has a ten second lead on second place, and in Inbounds Legacy, they are three seconds ahead.

For more speedrunning excitement, AGDQ 2019’s event schedule can be found here. The event begins a week from now on January 6th. There is also a Portal speedrun scheduled which is to be run by ConnorAce, who holds third place in Inbounds.

What do you think of the new record by Can’t Even? Are you going to tune in the AGDQ 2019? Let us know in the comments below.

Elden Ring Has Been Beaten in Just Over Half an Hour
Next
88rising Brings Compilation of Rappers Saving a Puppy in VR
Previous
Super Smash Bros. Ultimate Gives Hope to Iran’s Gaming Scene