Nintendo likes to be in its own bubble. The unique nature of the Nintendo Switch — that it’s a console and portable in one — allows it so it doesn’t necessarily compete with the Xbox One and PS4. As such, the Switch doesn’t really have any direct competition — that is until now. Chinese tech giant Huawei announced yesterday the Mate 20 X, a smartphone that is being pegged as “the best portable mobile gaming machine.” 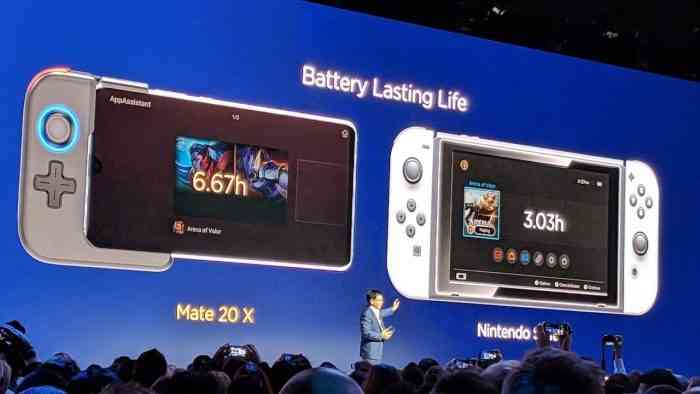 Huawei announced the Mate 20 X yesterday during a presentation (which can be viewed below) where they compared certain features of their gaming phone to the Nintendo Switch. The Mate 20 X features a 7.2-inch screen and has a 1080p OLED display compared to the Switch’s 6.2-inch display and native 720p resolution. The phone includes a Kirin 980 processor and a 5,000mah battery which apparently gives the device double the battery life of the Switch.

In terms of specific gaming features, the phone comes with a stylus for the touchscreen and a gamepad attachment, similar to a Joy-Con, that slides onto the left side of the phone. There isn’t an attachment to the right side, so you’ll need to use your right hand for touchscreen input.

While it might seem that Huawei has managed to make a device that fixes many drawbacks of the Switch, the cost for the Mate 20 X is approximately over a $1000. That’s before factoring in monthly service fees from a wireless carrier to use other features of the phone. More importantly, Huawei didn’t announce any specific games for the device nor talk about any interested developers. If one were to compare all of that to the Switch’s $299 price tag and its massive library of quality first-party, third-party, and indie games, it’s hard to imagine why anyone would want Huawei’s phone over Nintendo’s console for their portable gaming fix.

What do you make of the Huawei Mate 20 X? Leave us a comment down below.