The Game Boy Color turns 20 today! To celebrate, Famitsu magazine published an article full of fascinating trivia. The facts run from quaint to incredible, you can check out the whole dang list below, courtesy of Resetera: 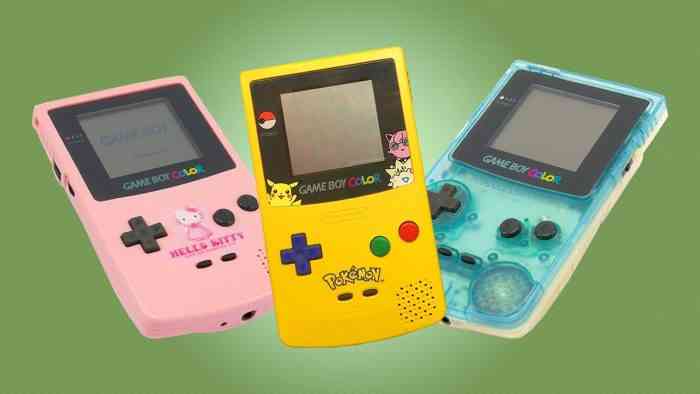 1. The GBC’s early catchphrases were “With color, every day is fun.” and “Joyful with color.”
2. Clear purple was the most popular launch color, and Yamauchi was the one who proposed that design.
3. Capable of 32,000 colors with 56 displayed at a single time
4. It was the first portable gaming machine with a strap hole
5. You could play original monochrome GB games in color
6. The GBC was almost the same size as the original Game Boy but significantly lighter. Famitsu notes that perhaps GBC perfected the perfect handheld size, as the new iPhone XS is almost the same width and length as the GBC.
7. It has the second longest battery life of the GB family at 20 hours (the original fat Game Boy having the longest with 35 hours, but double the batteries)
8. It had online capabilities with the Mobile Adapter GB, allowing you to play with people far away
9. There were many special editions such as the Sakura Taisen pink version, one celebrating supermarket Jusco’s anniversary, and several limited edition versions only available at Pokemon Centers
10. Along with the GBC launching in 1998, the GB Pocket Camera, Pocket Pikachu, Game Boy Light, Neo Geo Pocket, and Dreamcast were all available in the same time frame.
11. GBC carts had either a transparent casing or a black one. The dent for special GBC games was removed so people would be discouraged from putting it into a monochrome GB.
12. While Game Boy carts came in a hard plastic case inside the box, GBC games came in a plastic bag.
13. Two games were never sold in stores (in Japan): Super Mario Bros. Deluxe and Balloon Fight GB. You could only get these games by downloading them via a flash memory GB cart. Balloon Fight GB is available on the 3DS eShop.
14. The first Sega game to release on Nintendo hardware was Sakura Taisen GB in 2000
15. Games with that used the GBC’s infrared signal feature such as Phantom Zona and SMT Devil Children could use TV remotes or even air conditioners to interact with the game
16. Dragon Quest Monsters for GBC was released a few weeks before the hardware.
17. The first GBC exclusive game was Top Gear Pocket release in April, 1999. For first party titles, it was Mario Golf in August, 1999.
18. The most expensive GBC game was Mario Family, a Japan exclusive title that connected your GBC to a sewing machine to make Mario patterns. This is a real game.
19. The last GBC game was Doraemon’s Study Boy in July 2003. The last first party title was Mobile Golf in 2001.
20. The highest rated game in Famitsu was Mystery Dungeon GB2 with a 38, the lowest was All Japan Shonen Football Tournament with 14 points.

My own first Game Boy Color experience was with Dragon Quest 1&2. I spent countless hours dedicated to this rad little gaming machine, and it’s wild to think that it’s been 20 years since it was first released.