Assassin’s Creed Odyssey seems to be making a step away from its previous installment and moving towards more of an RPG. From what I played at EGX 2018 it seems that Ubisoft seem to know what they’re doing, as after finishing my demo I instantly wanted to jump back into the 2-hour queue to get another taste. 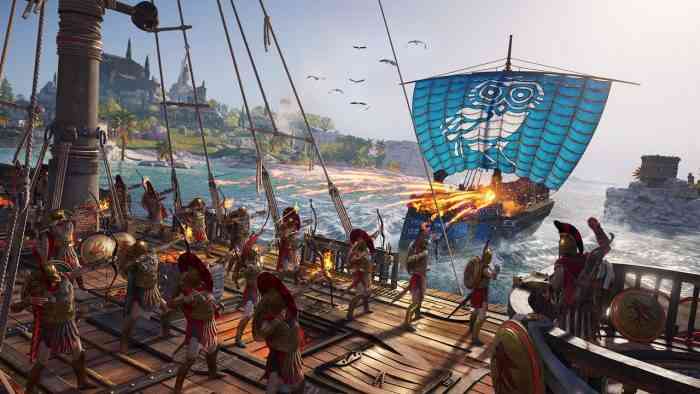 The two playable characters include the brother/sister combo of a pair of fierce Spartan mercenaries: Alexious, who was forced to live a life of exile, and Kassandra, who made a name for herself in the Peloponnesian War. You can only play through the game with one of these characters, who both experience the same story-line, but Kassandra seems to be the canonical protagonist. Though I didn’t get enough time with the game to get a good look at the overall story and character dialogue, what I did get to see was very fitting for each character

Odyssey goes for even more of the RPG approach than most of its predecessors, with three different skill trees you can unlock as you level up: Hunter, for those who want to be more proficient with their bow; Warrior for anyone who wants to see the whites of their enemy’s eyes; and Assassin for you sneaky people.

The RPG-ness continues with various quests and side quests, as well as weapons and armor that you replace as you continue through the game, each with varying levels of rarity. The gear is usually given to you at the end of quests, or a potential drop from certain enemies you kill.

These quests take you from town to town, and island to island, and there’s only one way to get to a different island back in Ancient Greece: boat. This means I got to hop on a boat and sail from island to island, which had a very Black Flag feel to it, even down to the ranged attacks aimed from the side of the ship.

Now, on that note, time for the juicy details of Odyssey’s combat. 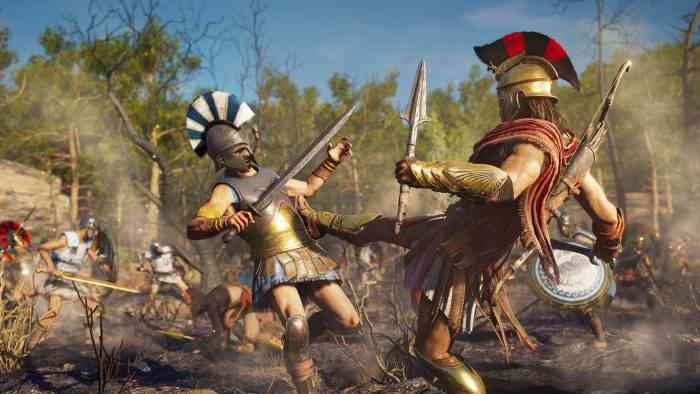 As I went from quest to quest I made sure to pick a fight with anyone that looked at me funny, and it seems that fighting in Odyssey has come a long way from the stale days of waiting to parry an oncoming attack for an instant kill.

Both characters have the ability to dodge and roll, use light and heavy attacks, parry at the right moment to stagger the enemy, and use special abilities unlocked in the skill trees. There’s also the option to switch between a short sword for fast and precise fighting, and a two-handed weapon for when you want to hit everything in a hundred-foot radius.

Enemies are your bog-standard small units that attack fast and often, the bigger units that are slower and like to stagger you, and units with shields. Each weapon has its own use to fight against the individual enemy type. I liked using a giant hammer to send the shield units flying and open them to attacks, but stuck to the faster blade for the other units as the hammer left me open to quick attacks.

It all flows together nicely and relies on the player to dodge and parry at the right time. There wasn’t often a dull moment in a fight, especially with some of the Warrior abilities unlocked through the skill tree. These skills use an energy bar which is charged up through combat. They range from flaming attacks, a Leonidas kick to open up the enemy’s shields, and a lengthy charge to reach those pesky enemies running away.

Combat in Odyssey is much more punishing than previous installments, especially if you take on more than one enemy at once. Healing for me was limited to an ability with a lengthy cool-down, and so I had to pay attention to every enemy surrounding me to make sure I parry on time. Utilizing all the unique abilities, the parries, and the dodging made for some edge-of-my-seat moments where I was one attack away from death with a few enemy units eyeing me up.

To make sure I’d get a good look at the combat, I had the chance to take Kassandra through one of Odyssey’s Conquest Battles. These battles are between two armies that each have an overall health bar that decreases as their troops die. To help your army get ahead you’ll have to complete various feats and challenges, such as killing the enemy army’s captains.

These battles usually go on for 10 minutes and really push you to your limit. I was often surrounded by several enemies and had to continuously back away to keep myself from being flanked. Thankfully you get healing in Conquest Battles whenever you complete a feat, but only slightly.

Overall, the time I had to play Odyssey didn’t feel like enough to even scratch what the game had in store, but I thoroughly enjoyed what I did play.

Assassin’s Creed: Odyssey will be released worldwide for PlayStation 4, Xbox One, and PC on October 2nd for owners of the Gold, Ultimate, Medusa, and Spartan editions, but October 5th for everyone else.