Broken Sword 5 on Switch is the “Ultimate Version”

Broken Sword 5 – The Serpent’s Curse is now available on the Nintendo Switch, announced Revolution Software and publisher Ravenscourt. Originally released all the way back in 2013, the Switch version bundles Episode 1 and Episode 2 together with a few added goodies.

New to the Switch version is an innovative new user interface “designed to take full advantage of Nintendo Switch’s functionality” and never before seen Behind the Scenes videos that are unlocked during gameplay. These movies were designed especially for the Switch version and detail the development process behind the game.

“The Nintendo Switch is an ideal console for both portable and home gaming, and we are hugely excited to be bringing Broken Sword 5 – the Serpent’s Curse to the platform,” said Charles Cecil, Founder and CEO of Revolution Software. “When we decided to work on a Nintendo Switch version, key to our plans was making the absolute most out of the innovative hardware, and that means exclusive content and controls. This is the ultimate version.” 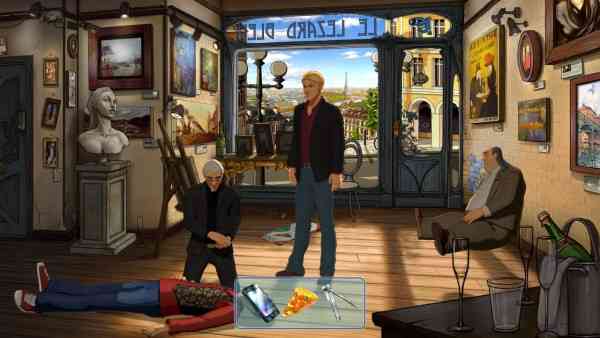 The new interface allows for players to jump immediately between Joy-Con play and touchscreen controls. The game will also output to full 1080p when playing on the big screen and 720p on the Switch’s small screen. The game is priced at $29.99 USD and is available at retail or as a digital download from the eShop.

Below is a short synopsis:

Paris in the spring. Shots ring out from a gallery. A robbery – a murder – and the beginning of another epic original Broken Sword adventure. An adventure that will hurl intrepid lawyer George Stobbart and sassy journalist Nico Collard onto the trail of a murderous conspiracy whose roots lie in mysteries older than the written word. Armed only with logic, integrity and a wry sense of humour – can George and Nico outwit evil forces both ancient and modern and save mankind from disaster?

Are you planning on buying? Let us know in the comments below.