Monster Hunter Generations Ultimate Will Have a Legend of Zelda Crossover

Beat Up a Barroth While Dressed as Your Favourite Hylian

After the recent announcement that Mario Kart 8 Deluxe will feature a crossover with Legend of Zelda, it seems Link is also making a stop at a local hunting lodge near you in an upcoming crossover with Monster Hunter Generations Ultimate. 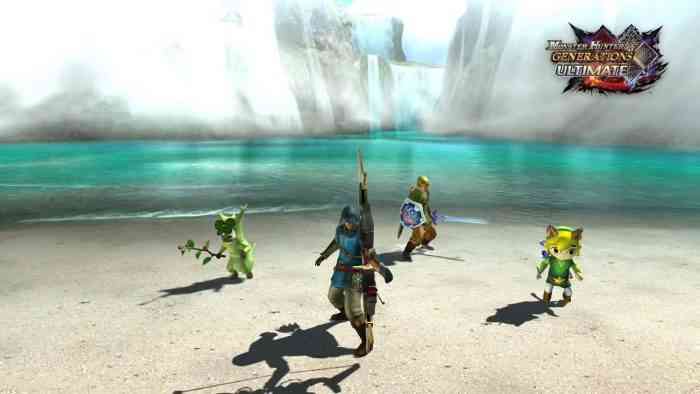 A trailer released on Nintendo’s YouTube channel showcases all the new outfits that both you and your Felyne companion will be able to unlock in Generations Ultimate, the newest Monster Hunter game that’s coming to switch on August 28th.

It seems like you’ll be able to dress up your hunter in Link’s classic green tunic, with the master sword and shield, as well as the newer 2017, Breath of the Wild look, complete with Sheikah Slate and fancy hood.

Your Felyne friend hasn’t been forgotton about either, with adorable outfits that’ll turn them into a Korok with a Deku branch as a weapon, and an outfit for the beloved Toon Link from Wind Waker and Phontom Hourglass.

Check out the new trailer below!

Originally released back in 2016 on the 3DS, Monster Hunter Generations has since been given a re-release on the Nintendo Switch for this August. This feels like a good fit for the Switch, as Monster Hunter allows for up to 4 players to play and hunt together over a wireless or a local connection.

Are you looking forward to Generations Ultimate to come to the Switch? Let us know!

Monster Hunter Rise Pre-Order and Collector’s Edition Detailed
Next
Australia Katyuska MoonFox is One of the Hottest Cosplayers on The Internet
Previous
Horizon Zero Dawn: Complete Edition Discounted to $20