Not Exactly The Legendary Destiny Rifle, But Pretty Dang Close

After months of searching, Destiny 2 players have tracked down a quest that leads you to the legendary Black Spindle! Well, not exactly. It’s actually the Whisper of the Worm, an exotic rifle that’s almost identical to the rifle from the first game. It still looks like a pretty wicked weapon, however. 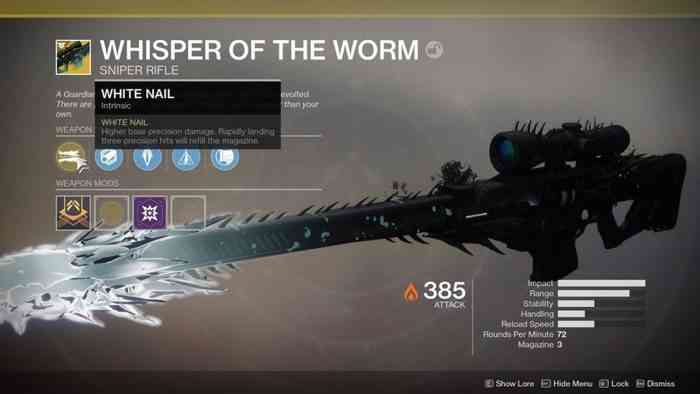 All you have to do is track down a secret quest on Io. During the Taken Blight public event, there’s a boss (Urzok) wandering around the Lost Oasis. Successfully eliminating them will open up a portal. After that, it’s just a matter of finishing the timed quest that pops up once you step inside.

The Whisper of the Worm is loaded with the White Nail perk. Said perk grants the gun higher precision damage, as well as refilling the magazine after you land three precision hits in a row. While this is great enough in and of itself, completing this quest also unlocks the heroic version. Finishing this version of The Whisper quest puts you on track to getting the Whisper of the Worm Box Breathing perk. This perk grants a damage boost after looking down your weapon sights for a long enough period of time. It’s a bit of work to get there, but afterwards you’ll be that much more proficient a sniper. Neat!