Sony is Sending 25% Off God of War Coupons Via Email, Check Now

Did You Get a God of War Coupon?

One of the best games of the year, or at least it was identified as such on our Best of 2018 so far list, is on sale. Well, sort of on sale. That is if you have a God of War coupon sitting in your inbox.

God of War has sold over 5 million copies already and you would think anybody who even has a remote interest in the game has it by now. That has not stopped Sony from sending out emails containing a 25% off code to US gamers who have yet to purchase Santa Monica Studio’s epic masterpiece.

The coupon (pictured below) is being sent to many individuals. It contains a unique code as you can see. At 25% off, this is the cheapest price we have seen to date. So if you’ve been waiting, check your email right now. 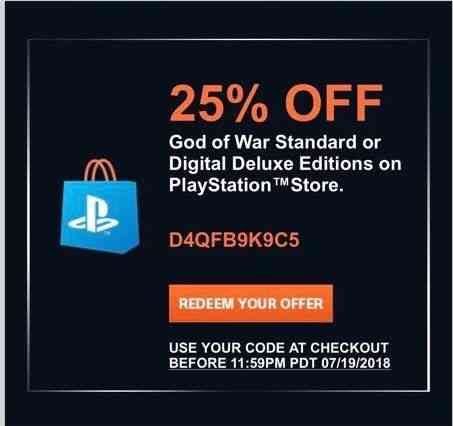 God of War is the latest entry into the series. A soft reboot, Kratos is now much older and wiser, living in the realm of Norse mythology. Joined by his young son, Atreus, Kratos sets out to spread the ashes of Atreus’ recently deceased mother, only for the world to strike out against him, and for Kratos to strike back. The game abandons the top down cinematic cameras and hack-and-slash combat for an over the shoulder third person approach, now giving players a powerful axe and shield and relying on proper combat tactics as opposed to the button mashing of old.