Starlink on Switch Gets the Good Stuff

During their E3 press conference, Ubisoft revealed more info about their upcoming toys-to-life space flight action game, Starlink: Battle for Atlas. As a bonus for Switch owners, Fox McCloud from Nintendo’s Star Fox series will be a playable character.

Showing once again Nintendo and Ubisoft’s unique partnership as of late, players will be able to play as Fox McCloud, alongside his Arwing fighter, in the Switch version of Starlink. There will also be “Star Wolf” missions only accessible on Nintendo’s little hybrid machine.

Ubisoft CEO Yves Guillermot introduced Nintendo legend Shigeru Miyamoto on stage to announce that a Switch exclusive starter pack will come with a large Arwing toy. Before you ask, no, it’s not an amiibo.

In the game, players will build a modular spacecraft, fix it to your controller using a mount, then immediately begin flying and dogfighting on screen. Kids can also swap out parts such as weapons, wings, and pilots which will magically change on the fly on screen. 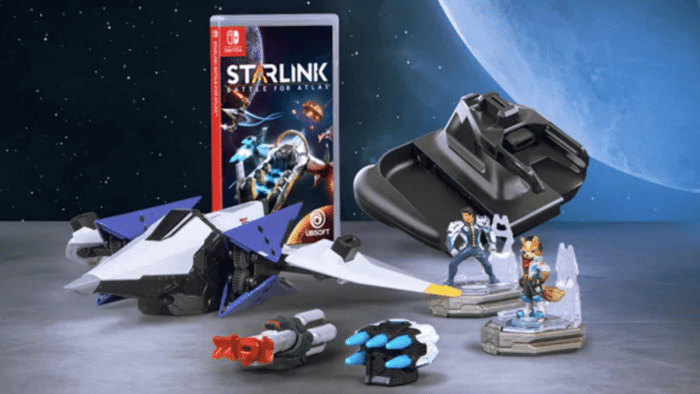 It’ll be interesting to see how Starlink performs when it launches later this year. While the toys-to-life genre was once a sales juggernaut, it has since petered out lately. Starlanders, Disney Infinity, and Lego Dimensions, while certainly fun, became dormant over time. Time will tell how Ubisoft will do.

Starlink: Battle for Atlas is releasing this year on October 16th on Switch, PS4, and Xbox One.

What are your thoughts on Ubisoft’s toys-to-life game? Drop us a comment down below.