First off is the Special Edition, which comes with a special slipcover and world map, along with exclusive story mode content such as a bank robbery mission, a gang hideout to sack, and a dappled black Thoroughbred racehorse. Other bonus content includes an Eagle Talon Talisman, which Arthur can use to increase the length of his “environmental awareness skill,” and an Iguana Scale which will make Arthur take less damage while riding his horse. Also included is a “Core Stat Boost” which pumps up Arthur’s health, stamina, and Dead Eye ability, as well as discounts on all upgrades to the Van der Linde gang’s camp, and increased cash rewards for robbery missions and selling animal carcasses. On top of all that, you get an extra Nuevo Paraiso Gunslinger outfit, and access to additional weapons such as the Volcanic Pistol, Pump Action Shotgun, and Lancaster Varmint Rifle. 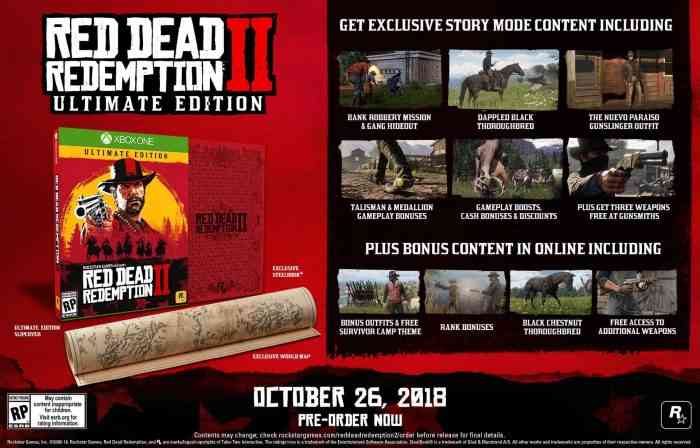 The Ultimate edition (pictured above) comes with everything in the special edition, as well as bonuses allowing players to rank up online faster up to Rank 25, free access to a Survivor Camp theme, a Black Chestnut Thoroughbred horse, and the Blackrose Bounty Hunter and Copperhead Enforcer outfits.

And most curiously, a Collector’s Box which doesn’t actually include the game itself? But instead includes a metal tithing box with a lock and key (which is not the game), a collectible challenge coin (also not the game), a double sided puzzle (arguably a game to some, but not the game in question), a six shooter bandana (perfect for pretending you are playing Red Dead Redemption 2 which it is in place of), a treasure map showing locations of loot in the game (which, again, is not included in this package), a set of pins representing weapons from the game that is not included, playing cards (which you can play many games with, one of which is not Red Dead Redemption 2), a 150 page replica of a magazine which is featured in the game (but is not the game), and 12 cigarette cards (I don’t know what those are, but I know they are not a physical or digital copy of Red Dead Redemption 2). The Collector’s Box is a Gamestop exclusive, will set you back $99 USD ($129.99 CAD) for not the game. 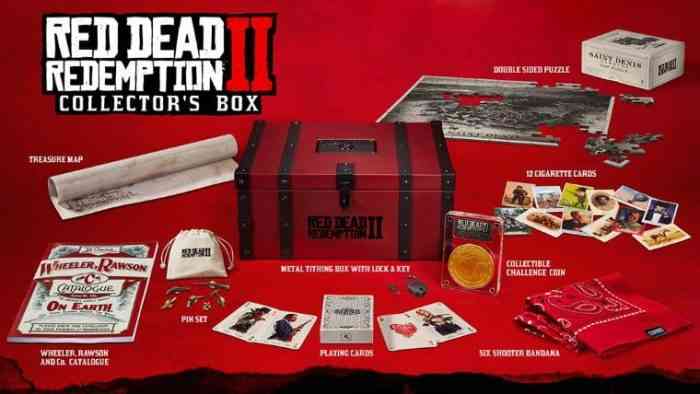 Also, for some reason, as of this posting, Gamestop does not have the above images or details for the Ultimate edition (which comes with the game) or the Collector’s Box (guess, just guess what I’m going to say here).

Which one will you be picking up? Let us know in the comments! And check out our coverage of those sweet, sweet pre-order bonuses for Red Dead Redemption 2.