Bioware Talks a Bit About What Fans Can Expect from Anthem

One week ago today, during this year’s EA Play 2018 Anthem got a spectacular showing with a new gameplay video and a ton of new information from Bioware. This has only increased the anticipation for the upcoming title however, as interesting as Anthem seems, many fans remain on the fence following the disappointment of Mass Effect Andromeda. In a recent interview Bioware’s Casey Hudson addresses these concerns.

Casey Hudson recently sat down with GamesBeat to discuss Anthem and how the relationship between Bioware and the publisher EA has changed substantially since Mass Effect Andromeda. According to Hudson, Bioware has learned from their mistakes and will be incorporating fan response into the game. “One of the big ones—there were people that wanted some specific DLC around the Quarians. We wanted to be able to do that as well, and we weren’t able to. That’s something we’ve applied directly to Anthem in that we want to be able to respond quickly to things that people want. Whether it’s something people want fixed, or even more important, when people are excited about something and we have the ability to build it, we want to be able to get that out to them.”

Casey Hudson also stated that Anthem is insanely ambitious and they will have a ton of post-launch support that will remain constant. As a result both the players and the developers will be heavily invested. “We’re designing Anthem to do that, and we’re keeping people on the project for many months. The plan is to go for years creating content to go into this game.” He mentioned that Anthem for them is about “building a game that’s designed to be able to receive new content and new story so that we can have an engagement loop with our fans. We find out that they really love a certain character, or they’re really curious about going to a certain part of the world. Then we can hear that and respond to it and start building story and content and features around those things.” 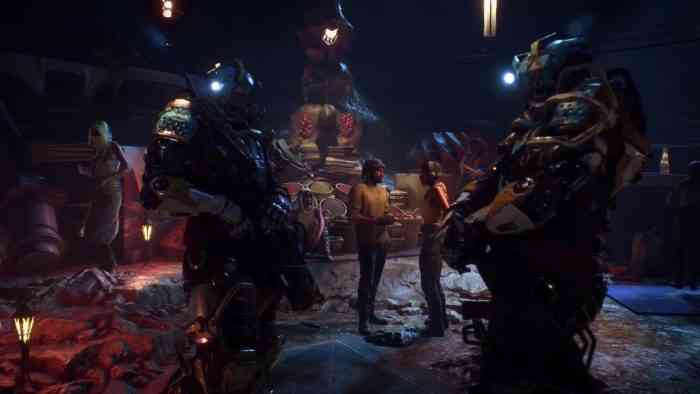 When asked if the game will be continuously updated, Casey Hudson had this to say, “We try to keep as much of a sense of real time as possible. We do that through a whole spectrum of features and content, from literally almost being able to, in real time, change things like weather and creature spawning…That’s on the fine-tuned end. Then we come up from that to get into longer world and character arcs, bigger pieces of rich content, or new feature-oriented things like a season approach. ‘Here’s what’s happening in the world. Here’s why the world is changing in a way that you want to come back and see all these changes to the world itself.’ That’s built into the premise of the game, this idea of a world left unfinished by the gods. It can really shift and change. We can use that to change why you want to come back and do things you think you’ve done before, because it’s all different. We can build that into a narrative, and then by having a spectrum of content, from light to very rich, heavier content, we can weave a fabric of all of that stuff to create a narrative over time.”

Are you excited about Anthem? Let us know in the comments below and don’t forget to keep it locked for updates!