The Walking Dead’s New Mobile Game Is Yet Another Pokemon Go Clone, But With Zombies

Save Your Neighborhood From the Zombie Threat in The Walking Dead: Our World

Finnish developer Next Games has properly revealed The Walking Dead: Our World, a new AR mobile game based on the smash hit AMC TV series. As you can probably surmise from the gameplay trailer, it looks like yet another Pokemon Go clone — only with more blood-thirsty creatures.

The Walking Dead: Our World uses location-based data and the Google Maps API to make it appear that your neighbourhood has been overrun with the living dead. It actually looks fairly decent and does seem like a step up over Pokemon Go in terms of animation.

Instead of flicking Pokemon Go balls, the gameplay will involve battling walkers (that’s what the series calls Zombies) “on the streets, in the park, on their sofa, wherever and whenever they want, alongside characters from the show, including Rick, Daryl, and Michonne”. You’ll be able to fend off the walkers with guns and/or melee weapons in first-person gameplay. The game is expected to be playable at GDC next week, so more details should be revealed soon. 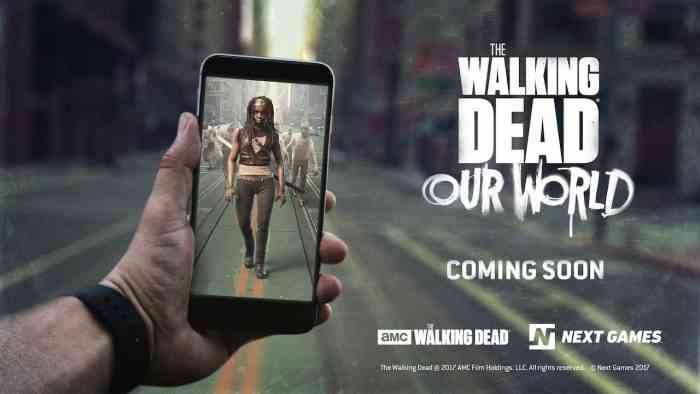 “With Google Maps, we can count on providing the most up-to-date location data, meaning that when new buildings or roads are built, we’ll have them in our game,” said Next Games CEO Teemu Huuhtanen in the announcement. “This enables us to create an immersive experience, tied to the players’ location. Google Maps’ unrivalled amount of location data, covering world-famous landmarks, businesses and buildings, such as the Statue of Liberty, the Eiffel Tower, the London Eye, Burj Khalifa and India Gate, makes exploring your surroundings a breathtaking experience.”

You can pre-register for the game on the official website. It will be released for iOS and Android in Q2 2018.

Pokemon Go-like games seem to be announced every other week nowadays. Niantic’s Harry Potter: Wizards Unite is slated for release later this year, as well as Ghostbusters World and Jurassic World Alive.

Will you give Our World a go? Let us know in the comments below.


Pokemon GO’s Elite Raids May Have Most Anti-Player Gameplay