From the makers of This War of Mine comes a new riveting experience steeped in moral choices and empire management. Get ready for Frost Punk, coming to Steam, GOG.com, and the Humble Store. It’s steampunk intrigue for the choice-oriented. 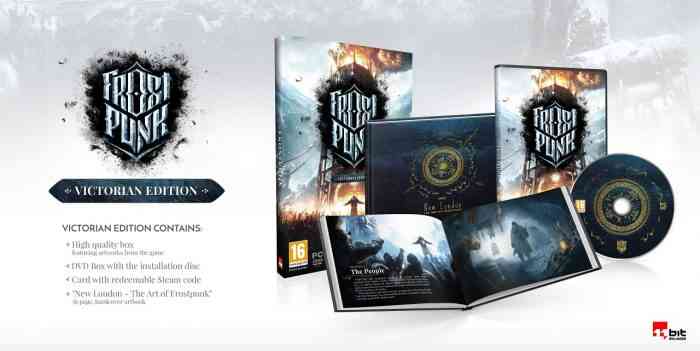 Frost Punk will launch for PC on April 24th, and the digital version will amount to $29.99. Mark your calendars because, if you lose power and the city dies, you’re a failure. But if you really want to get in the spirit of things, there will be a retail version in the form of a “Victorian Edition.” $34.99 gets you the game as well as a “New London – The Art of Frostpunk” hardcover book. When you’re not playing the game, you can behold the fantastic art that spawned the amazing icy locations. That said, there’s substantial video game polish to look forward to. As revealed in a press release, the studio took extra time just to make sure the game meets quality.

Grzegorz Miechowski, managing director at 11 bit studios says: “We wanted to make it before end of Q1, but we ended up slightly moving the release further. The reason is simple – we needed this time for the final polishing required to deliver a game that, we believe, is the best 11 bit title so far. For us, production value is always the most important thing and a bug-free, carefully-balanced game is crucial to offer gamers the experience we want them to have. This War of Mine was a unique game about moral choices, and with Frostpunk, we are bringing this to a whole new level. It’s true that it took us some time to get here, but I’m happy to say that it was worth it!”

Stay tuned for more news leading up to the release of Frost Punk. If you would like to learn more, you can visit the official site. Until next time,

Bloodstained: Ritual of the Night Passes the 1 Million Sales Mark
Next
What Happened at the White House Meeting on Video Game Violence?
Previous
Bethesda Games Studios Just Got Bigger, Thanks to New Austin Office