Call of Duty: WWII players will have to wait just a little bit more for the custom paint jobs feature to be available in the game, according to this blog post from the developer Sledgehammer Games. The feature would allow players to create, upload and see new paint jobs for the game’s weapons. 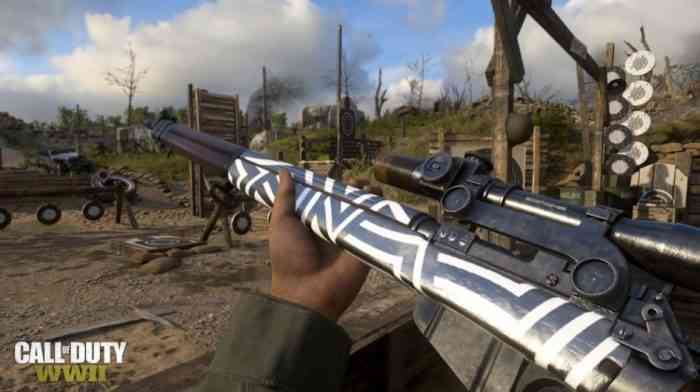 According to the blog post, Sledgehammer Games is currently testing the custom paint jobs feature internally and this testing has “taken longer than we initially anticipated.”

“We shouldn’t have mentioned timing before we were ready, and we sincerely apologize for that mistake,” the blog post read. “With that lesson in mind, we won’t set a new date until our testing has concluded. Our goal is to wrap this work up very soon, and once we do, we’ll provide an update with more concrete timing.”

That part of the post may be referring to this January tweet from ex-Sledgehammer Games studio head, Michael Condrey, which seemed to hint that the feature would be made available alongside February’s Resistance event and DLC for Call of Duty: WWII. We reviewed the DLC and you can read the review here.

“This is a feature that we know the community wants, and we are committed to delivering,” the blog post stated.

Call of Duty fans on the game’s subreddit seemed to be appreciative of the effort that Sledgehammer Games was showing when it came to keeping them informed about this anticipated feature.

“I greatly appreciate this sort of direct feedback. They did not address all concerns, but at least they are being straightforward about the things they did address,” said one subreddit user.

So Call of Duty fans, what kind of paint jobs do you think will be made available once this update comes out? What kind of crazy paint job combinations will you want to apply to your favorite weapon in the game? Let us know in the comment section!