Over 75 Individuals Tours Will Be Included

As promised, Ubisoft is releasing Discovery Tour by Assassin’s Creed: Ancient Egypt next week — February 20th to be exact. In case you missed our previous report, Discovery Tour basically turns Ancient Egypt into a museum, allowing players to explore the world of Assassin’s Creed Origins at their leisure, learning various historical facts without worrying about pesky combat fighting. 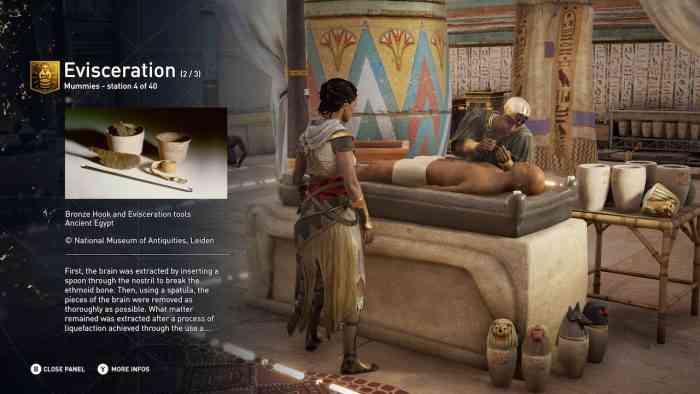 Some new facts have surfaced about the new mode, which will be free to download for anyone that owns the game, or as a standalone $19.99 purchase.

According to Ubisoft, players can expect an impressive 75 individuals tours across the mode, each lasting anywhere from 5 to 25 minutes long. Each tour is tied to five themes:

A variety of characters can be controlled during the tours including main protagonist, Bayek. Other playable characters include Aya, Cleopatra, Caesar, and more. Players are also encouraged to use the in-game Photo Mode like they would at a real-life museum.

A robust interview with Maxime Durand, a resident historian for the Assassin’s Creed franchise, can be read at Ubisoft’s website. It’s a lengthy but very informative read about Discovery Tour, its importance, and its creation.

Are you interested in the Discovery Tour? Let us know in the comments below.

Crossplay and Cross Progression Finally Coming to Rainbow Six Siege
Next
Hideki Kamiya Sheds Light On Why Bayonetta 3 Is Switch Exclusive
Previous
Win a Copy of Call of Duty: WWII The Resistance DLC for PS4