Breitbart is Really Mad at the Upcoming Far Cry 5 Antagonists

Once Christianity is in the Mix, Breitbart Takes to the Podcast

It’s Saturday, and I usually like to catch up on my gossip rags and get that dirt. So I go to my very-biased news sites, like CNN, MSNBC, CBS, ABC, and the BBC. But today, I go to the truth-tellers, the objective reporting that I need, know, and love to hear the hand-to-God (the Christian God) Truth (capitalized because it is the truest truth – the Ultra Truth). So I go to Breitbart.

And boy, am I glad to see my man Nate Church talking about E3 (the Electronic Entertainment Expo for you geezers and Breitbart readers) almost a solid month after E3 took place on Curt Schilling’s Whatever It Takes, and the answer is, it takes a turn. The article is titled “Breitbart’s Schilling, Nate Church Discuss Video Games: Tomorrow’s Leaders ‘Holding Controllers Today’”, which seems like a very fun, delightful topic about how the video game industry is growing and more people are exposed to it. There’s no way this could veer into a dark commentary about liberalism. 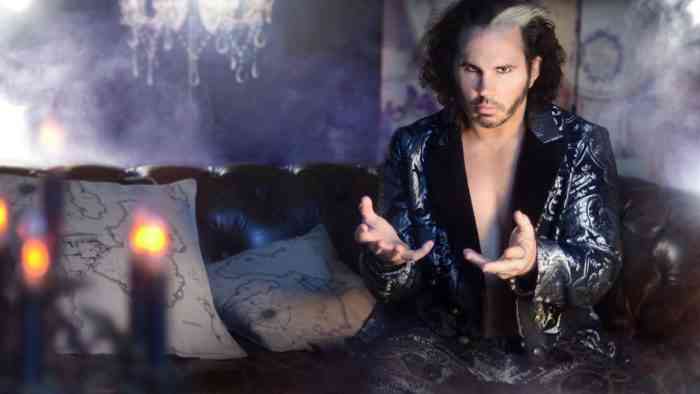 Time for the ultimate dirt bomb, and her name is Far Cry 5. Nate Church paints a picture of the game taking place “on American soil, in backwater Montana that’s been taken over by a cult, the plot is really sort of like, ‘What if Scientology took over a small town, what if they went militant?’ It’s a weird version of extremism, and you’re actually an American police officer that’s going in and trying to stop that.” No mention of Waco or other compound cults, which seems like a closer comparison, but let’s listen on!

“That’s the experience you get from the game itself, but from the marketing department, you get [the antagonists] standing in a church, playing ‘Amazing Grace,’ holding automatic weapons. The game is actually not really what they’re pushing, but they’re marketing off the division that is in our country right now.”

Church goes on: “I think it’s really important to talk about this, because the Far Cry series sells millions every single launch, and I feel like right now the voice in the game industry is very one-sided. We need the whole country to have a voice in the industry, especially when there’s a vast majority, and that voice needs to be loud.” I would like to dissect this statement very briefly with three questions: 1) Who is the “vast majority”, 2) if the whole country has a voice, is this the global video game industry you’re referring to, or the US gaming industry, and 3) do you think it needs to be loud, or thoughtful and intelligent first? Curt Schilling can clarify:

“You won’t find a more liberal place than the game industry, from a developer’s perspective. Having had a studio with over 300… I knew of like 10 percent of our employees might have been conservatives, which definitely has an impact on the content they create.”

Okay, so it’s the liberal voice and it’s the US industry, not the global industry. I should’ve known, Breitbart hates Globalism, the Earth is flat, and loud Trumps everything else: FACTS.

Here’s why I think the Far Cry franchise picked the setting they did: the new global hotbed for controversy is right here at home in the United States, and the whole world knows it. And there have been more cases of domestic extremism and I’m not pointing fingers herebuttheremaybesomethingtoit, so I would consider this Far Cry installment a gut check.

We covered a petition against Far Cry 5 that called the game a “white people genocide simulator”, and maybe that’s what has Breitbart all wound up. But since it’s Saturday, I made a lil’ collage of all the Far Cry games leading up to the latest chapter. Let’s look! 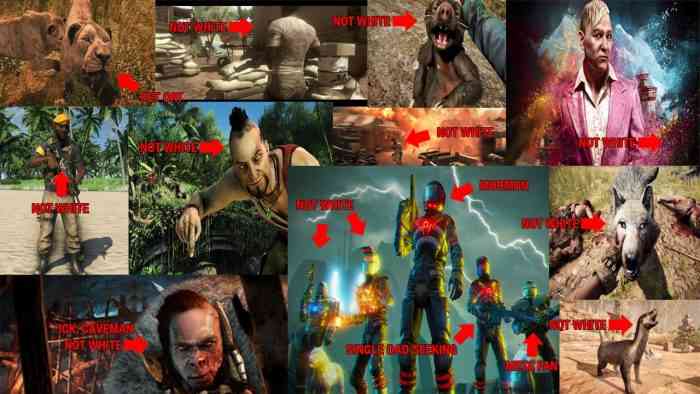 Seems like Far Cry has been pretty diverse about their enemy selection, covering a range of cultures, locations, and religions!

I thought that maybe this was just one instance of Nate and Curt just spitballin’, but then I found what Breitbart Tech thought of the Far Cry 5 release trailer:

“Ubisoft is courting controversy with their latest entry in the series, which seems targeted to appeal to the revenge fantasies of the Punch-a-Nazi crowd that has labeled anyone who hasn’t declared open resistance against Donald Trump’s presidency as a deserving target of politically-motivated violence.”

Pretty non-biased! There’s also some gems from the comments section, like this one:

“Made by a French company in a country overrun with Muslim invaders who are raping and killing at will. The streets of Paris sure look clean and how about those “no go” zones?
….but of course it is all the fault of white Christians so that is who the company will attack. So easy to hate and attack those who don’t fight back isn’t it? Cowards.”

I left off the username intentionally because their statement is embarrassing! But we use Disqus on this site too, so I’m excited to see what we come up with!

I thought I would check Breitbart against another source, InfoWars.com: Breitbart’s shouty younger brother. And this is what I got for a headline: “VILLAINS IN UPCOMING VIDEO GAME ARE WHITE CHRISTIAN RIGHT-WING EXTREMISTS FROM MONTANA.” I didn’t put the caps lock on, that’s what they did. At least InfoWars can identify right-wing extremists.

And with that, my Saturday is concluded! Hope you guys have a dirt bomb day! Here’s our video on Far Cry 5:

SOURCES: The Truth, THE TRUTH