Yesterday we brought you the news that Rise of the Tomb Raider was finally headed to the PS4 on October 11. It has a ton of new content that’s all centred around the 20th anniversary of the franchise. Worth the wait for PS4 fans? Probably! This new and improved edition features a completely new story chapter entitled “Blood Ties”, new co-op Endurance gameplay, PlayStation VR support for “Blood Ties”, all of the previously released DLC, more outfits, weapons, and Expedition Cards. The Limited Edition of the game will also feature a limited edition art book. 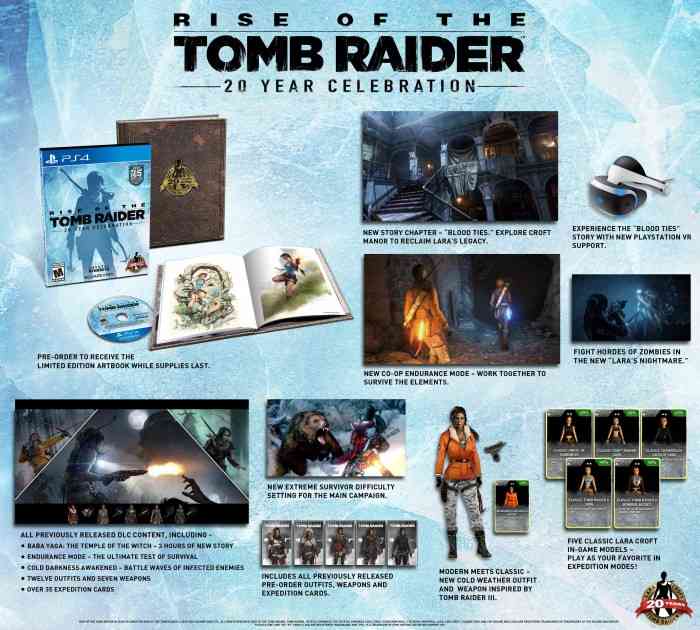 As part of the unveiling, we also got to see the accompanying box art for the game and it looked remarkably familiar. Some might say they’ve seen similar art for the Uncharted: Nathan Drake Collection. One person who took particular notice of the similarity, Neil Druckmann creative director and writer for Naughty Dog, couldn’t help but have a laugh about it. Seeing as plagiarism was all over the news regarding Melania Trump’s Republican National Convention speech and her apparent theft of a speech given in 2008 by Michelle Obama it’s almost as if the playful tweet wrote itself.

First Melania Trump and now this. ????
…
(Excited to play Rise on my PS4) pic.twitter.com/VGrbqxOYQg

A super fun, tongue in cheek response from Mr. Druckmann. All we can say for sure is that we can’t wait to get our mitts on Rise of the Tomb Raider – 20 Year Celebration Edition.


Uncharted 4 and Lost Legacy Remasters Are Coming to PC & PS5

Naughty Dog Has “Several Cool Things” in the Works
Next
Microsoft is Concerned About Your Health, New Gameplay Warning Coming?
Previous
Sombrero Brings its Multiplayer Mayhem to Xbox One and PC