Tom vs. The Armies of Hell Review

Monotony is something we are all familiar with in our day to day lives. The repetitive droning of completing the same task time and time again until we can do it with the bare minimum conscious effort. We often find ourselves dreaming of the fantastical to come crashing into our lives, if only for a moment, to save us from this dread. This is a perfect description of what Tom vs. The Armies of Hell will do for you in more ways than one.

Forged for you by the developers at Darkmire Entertainment, Tom vs The Armies of Hell sees the titular hero – a programmer at the aptly named Questionable Technologies – begin his quest terrified in the men’s room of his company after the entire building is accidentally transported into hell after maintenance workers in the Secret Projects lab activate the prototype portal machine. Tom’s co-workers are being assaulted and mauled to pieces by demons, and Tom, still cowering the washroom, is no exception to their fate. His arm is unceremoniously torn off and replaced with a demons arm by the stories friendly demon, Beezle (which I can only hope at this point is a nod to Beelzebub).

“Tom vs. The Armies of Hell plays like an arcade title with the odd splash of RPG mixed in for good measure.”

From the moment you are given control of Tom, pulling himself off the men’s room floor, you have a clear sense of the tone of the game going forward: it’s going to be comically messy and full of dark humor. The first co-worker you meet has been eviscerated by a demon, and as he supplies you with your first weapon he prattles on about the quest ahead of you to save yourself, and – most importantly – Tom can’t sign off his quest as over time.

Tom vs. The Armies of Hell plays like an arcade title with the odd splash of RPG mixed in for good measure. His aforementioned primary weapon is a gun used similar to the Ghostbusters proton pack to collect souls of the dead and use them as ammo, with different colours creating different effects (rapid fire, shotgun blast, electric bolts, etc.) Souls are dropped fairly readily but you still shouldn’t go blasting away like a maniac or you will be left with the basic, weak, overheating shots the gun will fire when your ammo runs out. Tom is also able to make use of purple crystals which will allow him to temporarily turn into a high powered demon while constantly regenerating his health, although in my experience the crystals don’t appear very often so use them sparingly. 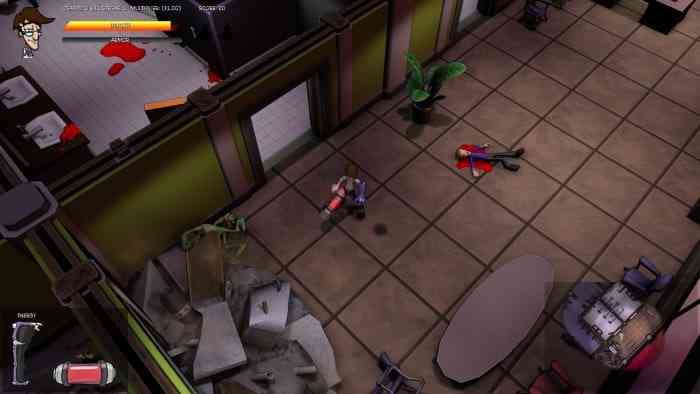 Every usable item Tom discovers is tech created by Questionable Technologies. Everything from improved sights to wrist mounted blades, makeshift armor, expanded ammo capacity, and more – although oddly enough these items are randomly spawned from chests, meaning you won’t always get the same upgrade from the same chest. When equipped, you can really feel the difference they make to Tom’s chances of survival; however any death you suffer will have these upgrades removed, regardless if you had them when you first approached your last checkpoint. This can make boss battles that little extra bit difficult when you die the first time. I say when because you’ll be learning the skills to defeat all of your enemies through trial and error. Rather than have a set number of lives, each time Tom dies he loses 100 points from his mission total, which is rather negligible when you consider you can make several hundred from a decently sized enemy encounter.

Darkmire’s approach to humor in this game is excellent. It not only is making bad jokes, but it knows it’s a bad joke and delivers it with that wry sense of self loathing that it just said something dumb. I found myself frequently grinning as I shot, blasted, scratched, mauled, and kicked various demons to a pulp because of the accompanying pun’s and swearing. This is particularly good because it balances the frustration of unbalanced boss battles. Despite warnings of where an enemy splash attack will hit, I was still taking significant damage when outside the radial mark. Trial and error is your best friend in this game and luckily the loss of points when you die is insignificant enough that you don’t start to panic.

“…humor in this game is excellent. It not only is making bad jokes, but it knows it’s a bad joke and delivers it with that wry sense of self loathing that it just said something dumb.”

Controls for the game are simple enough to get a handle on before the first boss fight, but being a primarily console player this is a title I would have felt more at home using a control as opposed to the keyboard and mouse.

Being that this is an arcade title, Tom doesn’t have an abundance of hit points, but because of the depth of story, finding new gear, and the general polish of this game, I found myself treating it like an RPG with far too few hit points when this is really a game designed to keep your fingers nimble and rack up points through combos and blood splatter. 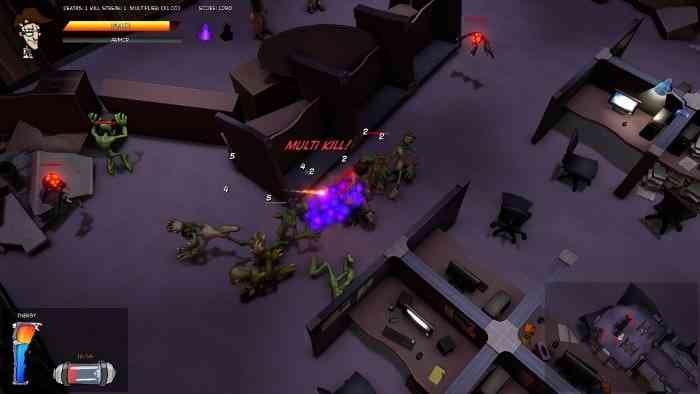 With a fun, self deprecating sense of dark humor, a neat combat mechanic and some truly enjoyable one liners and storytelling, Tom vs. The Armies of Hell is an enjoyable arcade title for those who are looking for the simple pleasures of death and swearing. Where the game starts to falter is its spiked difficulty in boss battles and unbalanced damage output, but this can be overcome with patience and some old fashioned trial by error as you stray away from button mashing and learn to control the demon within. 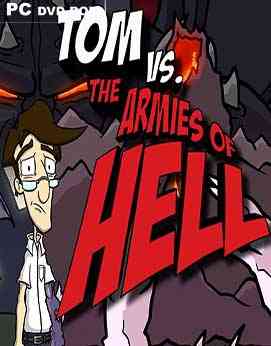