Bard’s Gold looks like a two-dimensional pixelated version of Super Mario World and is similar to the 1990’s games Snow Bro and Wonder Boy. To say the least, I was very eager to pick it up. When considering all of the aspects I originally found intriguing it was refreshing to find out that Bard’s Gold doesn’t disappoint. It looks, plays and sounds like a 1990’s platformer but admittedly isn’t without flaws.

The story begins when an evil goblin takes a bag of gold from the main character, Bard. The randomly generated levels of the game take you through four worlds, including dungeons and deserts, as Bard tries to recover his gold from the goblin. While it looks simplistic, Bard’s Gold is difficult in practice. There are so many dangers in each level, in each world, that it takes quite a bit of practice to become good at the game. At the end of each of the four worlds, there are boss levels that are in no way easier to defeat than the previous levels but add to the enjoyability of the game completely.

“While it looks simplistic, Bard’s Gold is difficult in practice.”

As Bard’s Gold focuses on maneuvering the traps and dangers of each level, it slows the gameplay down significantly. In turn, this makes it seem like there’s more gameplay than there actually is because it takes a few hours to play through the game. Though each of the levels needs to be played at a slower pace, they are timed, so there is a bit of added pressure to move just fast enough, whilst dodging the other dangers of each level. There is no real way to run through the level or try to make it faster as it will lead to your untimely death every time. Unfortunately this, paired with the repetitive nature of the game, it can become a bit boring to play over time.

Bard’s Gold redeems itself a bit and adds replayability with three difficulties: normal, retro, and roguelike. Normal is the easiest, with checkpoints and extra lives and retro is the same as normal, just with a few less starting lives. The best part of these first two difficulties is the upgrading that occurs after death, of both the maximum lives available and weaponry that will help you defeat the levels the next time around. The real challenge is roguelike, where there are no checkpoints, limited health, and no upgrades to your lives and weaponry after dying. If you aren’t very good at the normal and retro difficulties, I would strongly advise against playing roguelike. 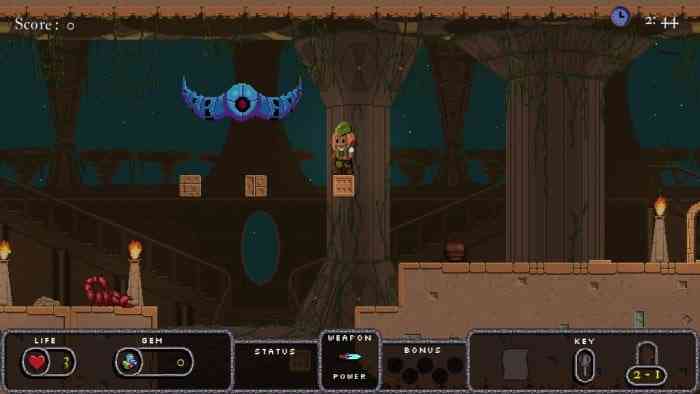 Although Bard’s Gold throws you right into the first level without so much as a tutorial, the controls are very straightforward and they allow for smooth mobility in each level. The developers, Erdem Sen, do a fantastic job making these controls not only classic like the retro games Bard’s Gold emulates but also responsive to every push of a button and flick of the analog sticks.

Just like the simple controls, the various monsters are designed well too, not only in graphics but also in the way they act towards Bard. Erdem Sen takes the guesswork out of how the monsters will act to an incoming attack. Each beast is programmed to react to Bard in a different way, from fast moving or jumping blobs, to flying bats and various worms that have a range of timed attacks. Though this is a simplistic approach to the design of the monsters, it makes each level a bit easier to maneuver in all three difficulty levels.

“2D pixelated graphics and retro gameplay, paired with the simple controls and great AI design outshine the areas of the game that fall short.”

The sounds of Bard’s Gold are dull and repetitive, and after playing the game for an hour or two they become outright annoying. This is not to say that the sound does not fit with the game, because it is a perfect fit for a retro throwback. Unfortunately, there are not enough soundtracks to cycle through during the gameplay. The graphics of Bard’s Gold more than make up for what the sound lacks and definitely gives the game it’s retro feel. These well-designed retro pixelated graphics are what make the game a genuine throwback and they add to the enjoyability of the game immensely.

Overall Bard’s Gold is a fun game, bringing the nostalgic feel of the 1990’s platformers to the current consoles. It’s 2D pixelated graphics and retro gameplay, paired with the simple controls and great AI design outshine the areas of the game that fall short. Bard’s Gold, while simple in theory, plays with a bit more difficulty, and though you may want to turn your TV down to avoid the uninspiring soundtrack, it is well worth its price of $4.99.

To Leave Prepares To Venture to Release September 9th