Mario has had a lot of jobs over the years. He has been a doctor, professional racer, and an athlete in almost every popular sport. In fact the one job he does the least is what he is known for: being a plumber. So imagine my shock and delight in Nintendo’s remake of Mario and Luigi: Superstar Saga + Bowser’s Minions when we find Mario actually going into the basement to fix the plumbing! Mario and Luigi: Superstar Saga (Shortened to MLSS) caught me by surprise and has kept me glued to my 3DS XL – an impressive feat considering my slowly dwindling interest in the handheld in favor of my Switch.

If MLSS sounds familiar, it’s because the game originally launched 14 years ago on the Gameboy Advance. (To the younger readers, the Gameboy Advance was our first step into backlit screens and the full range of colors to play handheld games on.) With the monumental success of Super Mario RPG on the Super Nintendo (and re-released on the Super Nintendo Classic) fans were treated to a stellar Mario RPG they didn’t think was possible. Building off of that success, Nintendo gave us Paper Mario on the Nintendo 64 and followed it closely with Mario and Luigi: Superstar Saga. The game built on the mechanics we loved from Super Mario RPG and splashed it with an art style akin to Paper Mario, giving us a solid RPG entry which, sadly, I missed out on the first time around.

Cut to today, 14 years later, where Nintendo has taken Mario and Luigi: Superstar Saga and given it new life on the 3DS family of handhelds. While the core mechanics of the game remain the same, it’s been graphically updated to be more of a high-resolution version of what Super Mario RPG was, and seeing it burst to life in my hands brought back a flood of happy memories. Some of the stages I encountered while playing were so reminiscent of Mario RPG I felt like the developers specifically hand-picked parts of the game to translate into MLSS, and if that is true, it was a fantastic decision. Mario and Luigi’s actions are controlled individually by different face buttons.You’ll have to master working together to traverse the land, defeat enemies, and solve puzzles. It sounds a little jarring at first but it takes no time at all to get the hang of it. Enemies can be struck before combat to deal bonus damage at the start of the turn, which leads into the sorely missed turn-based combat with timed attacks and defense. We all remember playing games and feeling positive that hitting the attack or defend button at the right time would have some sort of effect, right? Well, it was actually true in Super Mario RPG and is still true for MLSS. Perfectly timed attacks will see you inflict double damage, and defending against enemies feels incredibly more interactive as players must make Mario or Luigi jump on the enemies head or hit them with a hammer as they approach – or suffer the full force of the enemies might. It’s a small feature but it adds so much in the way of immersion, it isn’t simply a command you input but you yourself have to time your defense, know your enemy, and pay attention to what might be coming at you. Of course, what would an RPG be without leveling up, stats, and gear? You can tell quite noticeably when your stats increase as your turn will come faster, you will take less damage, and deal significantly more. The brothers can be equipped with a number of overalls and trinkets to boost their stats and give them special abilities. Right now my Luigi is equipped with an accessory that causes him to heal when he successfully jumps on an enemies head, which is nice because I don’t quite seem to have his dodge timing down as well as I do with Mario.

Of course, we can’t neglect the game also has “+ Bowser’s Minions” in the title. Shortly into the game, Mario and Luigi will notice a curious Goomba with a flag sticking out of his head. This unlocks a minor story that can be accessed through the touch screen at any time which follows Bowser’s Minions as they try to find their lost leader. The story of Bower’s Minions is cleverly designed to run alongside the games main story, as players control a Goomba put in charge by the other Goombas because they don’t want the job. I was excited to control the troops but sadly it’s more of a combat sim with a little bit of timed input to win the fight. Missions are replayable to get more experience points and strengthen your army but the army itself fights automatically, only asking you to hit the button for a kill. While there is strategy in which minions you choose to fill out your army, It’s a bit of a letdown. For how little it seems to add, I don’t know that it needed to even be put into the game as MLSS easily stands on its own two feet. Simply put, Mario and Luigi: Superstar Saga + Bowser’s Minions is a fantastic RPG for the 3DS. For those who were not fortunate enough to experience Super Mario RPG or the original Mario and Luigi: Superstar Saga, this is a must-have. The gameplay is fun, the puzzles are simple yet interesting, and the combat reminds us older gamers of a time when turn-based combat was at its peak. The Italian-gibberish Mario and Luigi speak is amusing to hear, and the game moves along at just the right pace. As with most Mario games, it is uniquely wholesome, and the kind of game you can happily lose track of time with.

**A 3DS review copy was provided by the publisher** 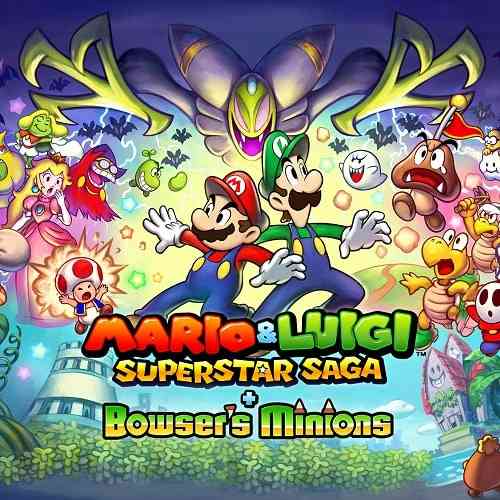