Lock’s Quest Review – The Remaster No One Asked For

If you’ve heard of Lock’s Quest, more than likely it is because of the 2008 Nintendo DS release. Well, here we are about 9 years later and the Lock’s Quest remaster has released, despite not really being asked for. While the remaster and remake card has generally been overplayed, Lock’s Quest brings a relatively unique gameplay experience to a new crowd. The combination of RPG, tower defense, and strategy was more than enough to intrigue me, and what can I say, I’m a sucker for awesome pixel art. For a remaster that no one really asked for, how does the Lock’s Quest remaster fare in the modern day?

The story begins with the player character, Lock, discovering that his village has come under attack by a Clockwork Army. To save his village and continue the fight against Lord Agony, Lock enlists as an archineer, essentially a builder that utilizes Source to construct objects. While the story itself starts off quite cliched, I was pleasantly surprised at the world building within the narrative, which itself improved as the story continued.

Overall, this remaster is a decent title, though unfortunately is not a remaster that was wanted or memorable.

The gameplay itself focuses on two distinct phases: build and battle. In the first phase, Lock utilizes Source to build cannons, walls, traps, and other structures. During the battle phase, these structures act as defenses against the Clockwork Army, and Lock can maneuver around the battlefield and physically attack enemies. The gameplay itself is a challenge at times, though fair; additionally, it was quite a bit of fun planning where to place towers and funnel enemies into. Lock’s Quest requires players to manage both their time and resources during the build phase and to manage Lock’s positioning and repairs during the battle phase.

Where the game was flawed included the repetition involved as well as controlling Lock. Specifically, the game gets to certain points where the difference between levels were insignificant and makes the player feel as though they were repeating levels. As for the controls, the game did not feel very suited for mouse and keyboard controls, with controlling Lock during combat being the main symptom of clunky controls. In addition to these flaws, certain functions and buttons simply became unresponsive at times, such as towers not attacking or the “sell” function not selling at all. 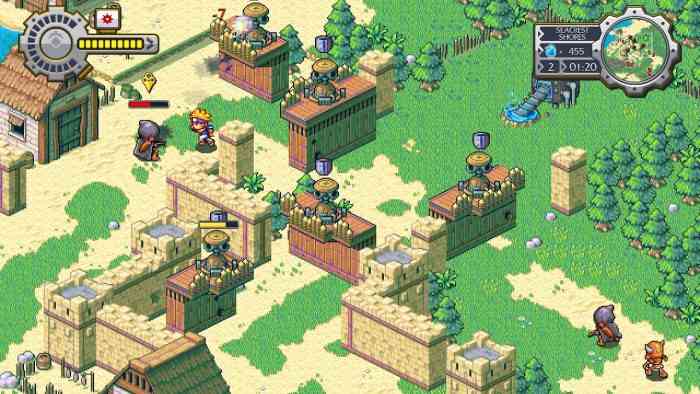 Furthermore, the Lock’s Quest camera was quite annoying as you are unable to move Lock while moving the camera, leading to situations where Lock is approaching the edge of the screen and you must stop him before you can re-center the camera on him again. Despite the camera issues, the graphics in Lock’s Quest are aesthetically pleasing. Specifically, the pixel graphics look great and are sure to stand the test of time. However, the characters during dialogue are drawn in a manner that is somewhat disconnected from the pixel graphics in an immersion breaking way. While I thought the pixel graphics and designs for characters were well done, the drawings for the characters in cut-scenes were not as enjoyable.

The audio of Lock’s Quest is par for the course, with distinct sound effects appropriate for battles. The background music was varied enough to keep from being repetitive, but also avoids being catchy or otherwise memorable. For a remaster of a nine-year-old title, some voice acting would also have gone a long way in improving the narrative quality.

Overall, this remaster is a decent title, though unfortunately is not a remaster that was wanted or memorable. With the combination of RPG, tower defense, and strategy, this was a title that I thought was tailor-made for me, but the various issues were not able to be overcome by the unique combination of genres. Despite some promising features, the negatives associated with the gameplay and camera were enough to keep me from fully enjoying this title.