Simplicity is a rarity in games these days. As games offer more and more features, the need for complex commands can be overwhelming, so anytime we can take a deep breath and enjoy a classic-inspired platformer it’s often a gust of fresh air in an otherwise tactical and methodical digital experience. Illusoria is a 2D platformer that takes its inspiration from similar titles in the 90’s and relies on the skills of survival and puzzle solving over combat; a mechanic it handles very well, despite a few notable flaws.

The story is a colorful nod to classic-style plots as well, with a prophecy of the return of The Puppet Master, a villain who can corrupt the world and all living things in it. Our hero is the destined “Keeper of the Flame,” the one who will defeat the Puppet Master by finding the power of the Guardian. It’s cheesy, but in a truly nostalgia-inspired way. While the game itself has some beautifully rendered environments and interesting puzzles, there were a few issues I noticed straight off the bat after loading it for the first time: While not a major issue, the game begins defaulted in another language, so immediately you’ll want to clamber through the various options until it’s legible. The more impeding issue is that it doesn’t appear to have a tutorial or control scheme option at all. The controls are generally the buttons you might expect them to be, but it can still be bothersome when you are told to “press start” and you can’t seem to find out what that actually is. In fact, it wasn’t until a good twenty minutes in that I discovered sprinting on my own because I had assumed it would be explained to me, or potentially unlocked. You are told how to jump, push objects, and roll into small spaces, but the tutorial ends there. 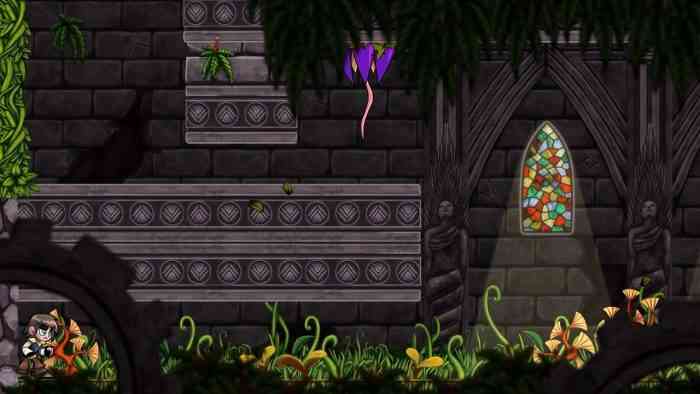 That being said, when you finally do become comfortable with the controls the game is quite enjoyable. The landscapes and level design are reminiscent of the 90’s platformers most of us know and love, and the slightly blurred and shadowed effect of the environment in the foreground looks fantastic and adds real depth to the stage. Making your way through puzzles and passed enemies without the ability to attack them in the early stages will take a lot of trial and error: as in, be prepared to die frequently. While the game has its roots in campy titles and the environment is bright and colorful, this does not stop the terrifying and gruesome reality of death. Falling on spikes will see blood spurt from your body with a sickening thud as you are impaled. Plants that shoot some sort of energy ball make you explode into crimson-soaked bits. Giant mosquitoes will literally catch you out of the air and impale you through the eye and out the back of your skull with its nose and then take you off screen for consumption. And that’s just to name a few of the horrific ways Illusoria unexpectedly murders you. 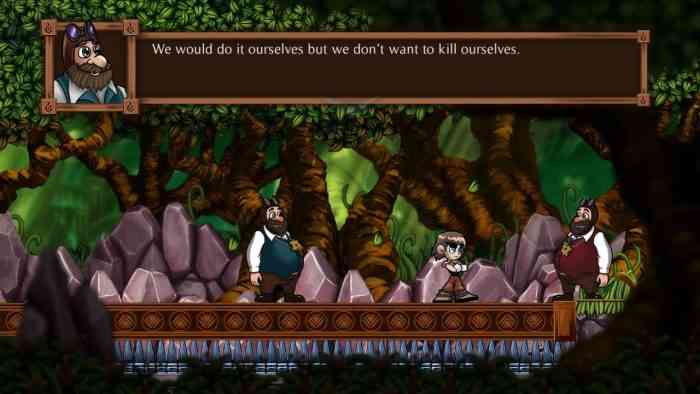 Illusoria is an enjoyable 2D platformer with heart and a little bit of sass, its colorful characters knowing full well the danger they ask you to throw yourself into. While the lack of button mapping or even a general guide to the controls in the menu can be off-putting at first, the gameplay itself is a delightful challenge. Traversing a beautiful and colorful world with only your wits makes for a fun-filled cringing experience as you frequently watch the demise of your hero time and time again. Illusoria sets out to recapture the feeling of classic 90’s platformers and it succeeds.

Developer: Under The Bridge