Kingdoms and Castles Review – Charming Way to Build an Empire

Put on that crown and lead your people to prosperity, Kingdoms and Castles gives you the lay of the land to settle and expand your empire and defend the people against threats both foreign and domestic. Created from an overwhelmingly successful Fig campaign in which creators Pete Angstadt and Michael Peddicord asked for $15,000 to develop the game and received nearly $109,000. Once you get your hands on it, you can see why so many people were interested in contributing to this game. Kingdoms and Castles is incredibly charming; The simplistic polygonal world is colorful, relaxing, and most importantly, fun. If the names of the game’s developers seem familiar, it may be because they had worked on such enchanting games as Spore, Abzu, and Journey, to name a few.

The game tasks you with building and sustaining a kingdom. You can select from any plot of land on the map to place your keep and get to work building your little polygonal society. When starting a new game you are given the option of playing with or without external threats – the invading Vikings or fire-breathing dragons – and for my first outing into the game, I decided to go without and get a feel for what it had to offer. The game lacked a tutorial, however, it isn’t a terribly complex concept to play: tech trees are practically nonexistent, with only a few buildings unlocking newer options, and it’s a welcome feature to keep the real meat of the game where it ought to be: expansion.

“With the changing seasons, any crops not picked and stored by the time winter comes will be destroyed and your people will starve.”

Peasants need homes. Homes require wood, and with all the tree’s taking up valuable land, it’s necessary to chop them down. They also need food, so you must build farms on fertile soil. As you expand, you need more peasants so you must build more homes to attract them to your settlement. It’s a basic formula but one that will require monitoring – made easy by the simple HUD. Peasants must be kept happy, as unhappy subjects can leave town. This means throwing festivals, cultivating enough food, building libraries, and churches, as well as providing them with necessities such as charcoal and watering wells. As your city expands outwards and you require more farmlands it becomes vital to building granaries to store your crops. With the changing seasons, any crops not picked and stored by the time winter comes will be destroyed and your people will starve. 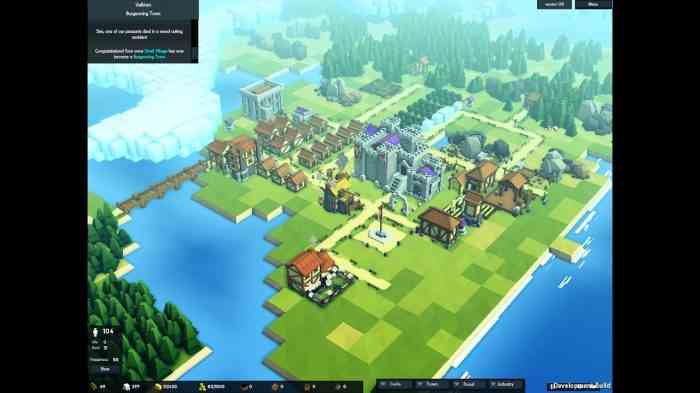 Buildings can randomly catch fire, plagues can break out, and crops can flood making them unusable – among other natural hazards – which should keep you on your toes. That brings us back to the external threats. Vikings will land on your shore and set buildings ablaze in typical Viking fashion. Peasants will put it out but they are not equipped to fight – that is what training at the barracks is for. Castle walls can be erected, as well as siege weapons put in place to help deter any would-be invaders. Even the destruction of your own home seems a little charming, like the lovable neighbor kid getting up to no good.

“When a peasant dies of old age, it will tell you who they were and in the tiniest corner of your heart it makes you sad knowing a loyal servant has passed.”

Each peasant has their own name and a random, often comical fact about them. When a peasant dies of old age, it will tell you who they were and in the tiniest corner of your heart, it makes you sad knowing a loyal servant has passed. With so little real story to the game, I can’t imagine how they make me care so much for my tiny polygonal peasants.  My kingdom became largely self-sustaining later in the game with over 1000 peasants. When the plague broke out my plague doctors (complete with polygonal plague doctor masks) would cure everyone except a handful of them. Farms were maintained, fires were dealt with swiftly. I had over 100 peasants with no jobs to do so I had them continue to build fortifications needlessly. 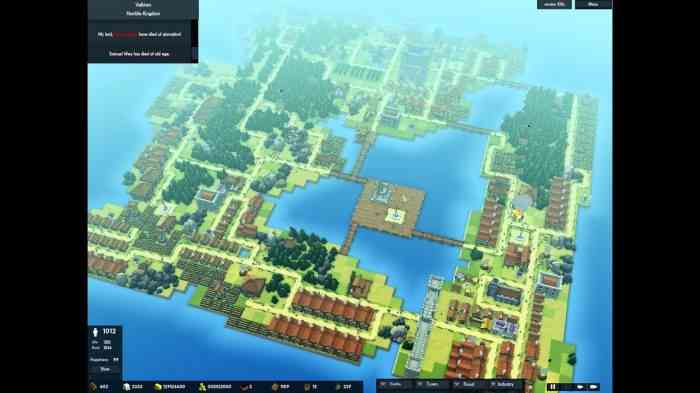 That being said, I’m not sure how to actually win the game or if it is endless. My kingdom had survived for well over 100 years, my population was stiflingly large, and there is no room left on my landmass to continue expansion. While I intend to keep playing this map for as long as my kingdom will let me, it would be nice to know there is a happy ending for my people: whether it’s by surviving X amount of years or reaching a certain population number.

Kingdoms and Castles is a charming, relaxing, and easy to play real-time kingdom builder. Using simple polygons and vibrant colors, the game is heartwarming and challenges you to meet the needs of the people while expanding your empire. With a minimal tech tree and clever mechanics such as environmental threats and weather, the only downsides are an incredibly small text size and no real end in sight. I have no idea if the game is endless or I somehow have yet to reach it despite finding myself unable to progress further in expansion or resources. It’s a whimsical and enjoyable game that I believe everyone can find something to enjoy in it. 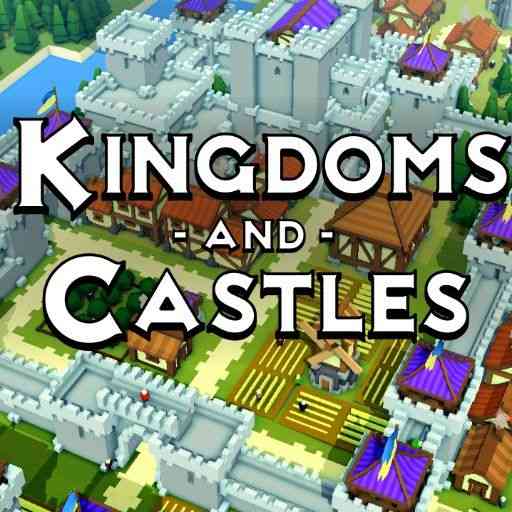