Kerbal Space Program is a space flight simulator developed and published by Squad, and subsequently ported to the PS4 by Flying Tiger Entertainment. KSP has been a prominent, popular PC game for the past couple years, culminating in many spectacular user creations of both realistic and fantasy styled spaceships. The game revolves around the primary acts of building a space-worthy craft, and sending some of your trusty Kerbals into the void. For space enthusiasts, aspiring astronauts, and sci-fi movie fans, Kerbal Space Program is a great way to experience some (mostly) realistic spaceship related antics.

There are three main modes: Science, Sandbox, and Career. In Science mode, aside from building spaceships and flying them, you are required to utilize the R&D department in order to continuously unlock parts for your ships. Career mode encompasses all the aspects of Science mode, but also the administrative aspects of your organization such as upgrading your base. Lastly, Sandbox mode allows you access to all parts without worrying about research, letting you create what you want right off the bat.

The game also features a Tutorial mode as well as a Scenarios mode. In Scenarios, you are provided a certain starting point with a goal in mind, and it is up to you to reach it. Finally, the Tutorial mode is perhaps the most essential part of Kerbal Space Program. It is very well done, providing players with the tools to succeed and enjoy the game to its fullest.

“One thing should be noted: you will fail, and then fail some more.”

Overall, the gameplay seems simple: build a ship and fly it. However, this is definitely not the case. KSP is extremely deep and rewarding. It is not as simple as putting together a nice looking ship; different factors such as weight, weight distribution, thrust, and much more need to be taken into account. One thing should be noted: you will fail, and then fail some more. Perhaps the most rewarding experience is finally succeeding after failing countless times, especially when you do so without casualties.

The controls are very well done. It’s clear that you’re meant to use a mouse and keyboard, though the PS4 port manages to incorporate everything very nicely onto a controller. It was quite impressive not only to put a keyboard’s worth of controls onto it, but for it to almost feel quite natural to use. You use a cursor (left thumbstick) which can be frustrating when selecting from a list, but useful when placing ship parts. One issue I had with the default controls is that the game utilizes the controller’s motion controls in order to move the cursor, at times causing it to move off of the intended target. Luckily, you can disable this feature. 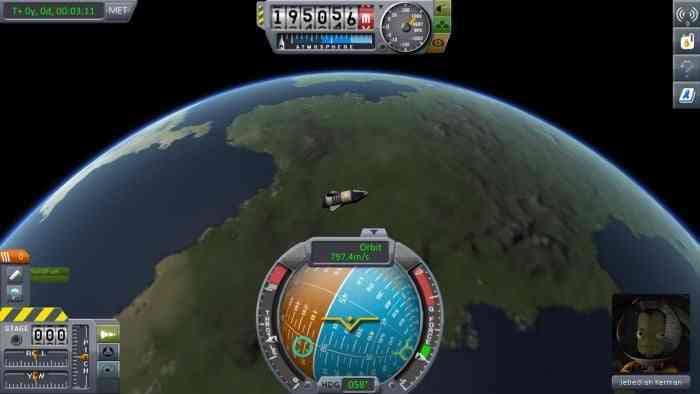 The graphics are relatively bland in terms of the environment. The Kerbal who you lead seem goofy when compared to the serious nature of your mission, but do well in keeping things light. The various ship parts are detailed to an extent, and differentiate themselves from each other while maintaining the proper physics dependent on their shape. Despite the moderately simple graphics, the game does suffer from frame rate drops, especially when fast forwarding during space travel. The various effects, like explosions, are also not very impressive, but adequate for simulation purposes. Lastly, the user interface features very small text, and it is recommended to enlarge this in the settings.

Much like the graphics, the sounds in the game are bland at times. For example, explosions and take off effects are not very impressive and do not seem to always align with the actions on screen, especially when fast-forwarding. Audio is rather minimal overall. Perhaps a soundtrack when travelling through space would make things a bit more interesting. 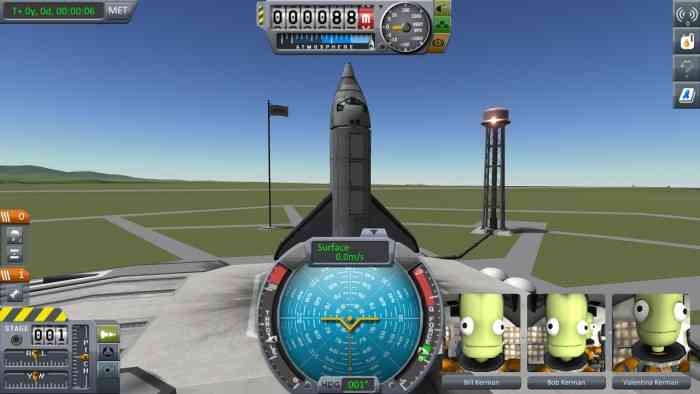 Overall, KSP is an amazing space flight simulator, with some issues that keep it from being an amazing game as well. Through the physics, science, and controls, Kerbal Space Program will manage to give players hundreds of hours of addictive, rewarding gameplay. Technically, the game pushes consoles to their limit, resulting in frame rate drops despite the minimalist graphics. As a space simulation, it is top-notch; however, it’s not for everybody. For those willing to put in the time to learn the mechanics of the game, this is an extremely rewarding experience.