In this era of comic book films, it seems that everyone has become familiar with the really big, iconic books that helped shaped comics and helped bring about this time where what was once concerned fringe has become almost more than mainstream. It’s of no surprise then, that when WB Animation announced that they were going to produce a film version of The Killing Joke, fans began salivating at the possibility. What was going to be another VOD/BluRay release as is the typical format for WB Animation, turned into something more as the demand to see this film skyrocketed. What we got was a one night showing of the adaptation of one of Batman’s single most defining books of all time.

The very idea of The Killing Joke brought Bruce Timm back to Bats and he states several times that he wouldn’t want to do it without bringing back other Batman mainstays in Kevin Conroy and Mark Hamill, two names synonymous with Batman and Joker. It just wouldn’t be the same without them. I couldn’t agree more. The voices of the two titular heroes will transport you immediately into the grimy world of Gotham and take you on trip down the darkest chapter in Batman/Joker’s long history.

“The voices of the two titular heroes will transport you immediately into the grimy world of Gotham and take you on trip down the darkest chapter in Batman/Joker’s long history.”

The film itself is excellent. Penned by Batman mainstay Brian Azzarello, the film is exactly what you hope it would it be. Equal parts dark, morose, funny and moving, the film is as good as you’re going to get when adapting a property. Some parts have been slightly altered but if you’re familiar with the source material, you’re going to be very familiar with the film. Which, again, is very excellent and features a jazzy Broadway tune that I personally thought was an excellent addition and will be comically familiar to anyone who knows the book.

I wasn’t sure what to expect from a feature that had the billing of ‘One Night Only’ in regards to trailers or pre-show, but WB came prepared for such an event. The lead in to the film was an absolutely enthralling 10ish minute mini-doc where Mark Hamill talks about his time and the evolution of him as The Joker. It also features other key creative pieces, such as Timm himself, chiming in about bringing Killing Joke to the screen, but it mainly focused on Hamill, who is The Joker to an entire generation of people, talking about how he’s crafted his iconic voice work as The Crown Prince of Crime. He even delves into Joker’s storied history, showing his comic history chops as well. It was an absolutely riveting piece. They also followed the film with another mini-doc where they talked about the music in the film. The score is something that tends to be overlooked even though it plays such a monumentally integral part in a film, so I thoroughly appreciated seeing an in-depth look into scoring such an important film. They also got very in-depth into the making of ‘I Go Looney’, that Broadway song I mentioned, and how they took the song written by Moore and gave it a new life. That also featured quite a bit of behind the scene footage of Hamill in Joker mode, so it was quite engaging. The show I attended was practically sold out and I was very happy to see that. My only wish was that every fan of The Killing Joke could have come to the theatre and enjoy this wonderful evening and have one comics’ most important books be faithfully replicated on screen. If you didn’t get the opportunity to go see it in theatres, I’m sorry you didn’t get the experience. The next best thing you do is pick it up when it drops on BluRay and enjoy all the mini-docs and the film itself from the comfort of your own home. It will still be an amazing time and it won’t have to be One Night Only. 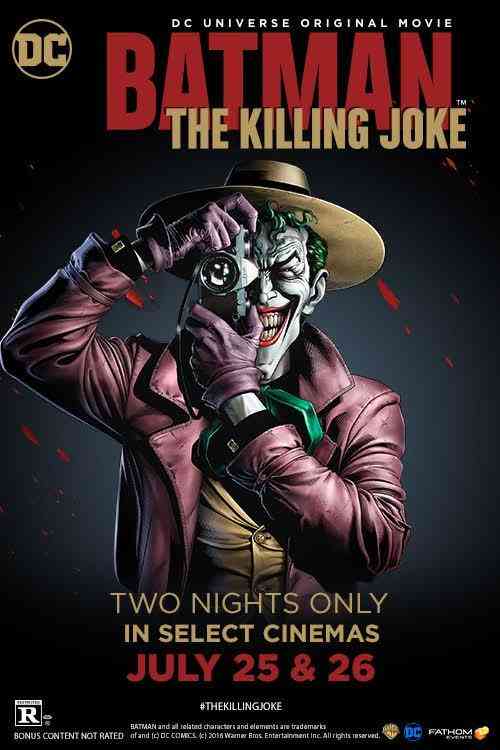