Originally released in North America on the Nintendo Gamecube back in 2003, Ikaruga has since seen releases on the Xbox 360, PC, and now the Nintendo Switch. While I was initially intrigued by the title when it was released on the Gamecube, I ultimately decided against purchasing the game for one reason or another. Flash-forward fifteen years, and I now have the opportunity to play one of history’s favorite shoot ‘em ups once again on a Nintendo console.

In playing through the game, a plot is noticeably missing. However, a little research puts the player in the role of Shinra, a survivor of a battle against Tenro Horai and his followers. As he crash lands into a village called Ikaruga, he is nursed back to health and provided with the Ikaruga, a specially designed ship that can switch between two different polarities.

At its core, Ikaruga is a vertically scrolling shoot ‘em up title. The game is simplistic in its design, with just five stages, three difficulty settings, and no power-ups. Ikaruga’s core gameplay concept is its polarity system, in which players can switch the polarity of their ships between black and white. Players are only damaged by the opposite colored bullets while they absorb all matching colored bullets, which would charge the players ability to fire off homing missiles. In addition to defense, polarity plays a role in damage, with players dealing double damage to enemies of the opposite polarity. This seemingly simplistic feature results in an additional layer of strategy, finesse, and frustration while also leading to additional challenges within the community such single-color runs.

The game’s three difficulty settings also seem simple in theory, with the difficulty levels changing if and how enemies return fire on your ship when destroyed. In practice though, the hard mode becomes nightmarish as more and more enemies start to appear. Overall, Ikaruga is a hearty challenge. While I was able to get through the first couple levels on the default settings on easy, the third level quickly turned it up a notch and wrecked me. Fortunately, the game allows players to adjust the number of lives and continues available to the player. Despite using these to my advantage to play the game fully once, I felt compelled to go back and continue trying my hand at the game with its default settings. Though a single full playthrough lasts roughly 30 minutes, players can always find new and interesting challenges that keep them coming back for more. Despite being more than 15 years old at this point, Ikaruga maintains its challenge and charm. 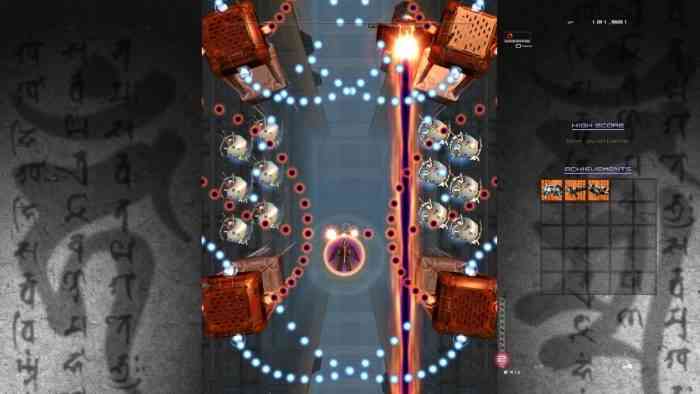 Ikaruga is a title that blends its graphics made for gameplay features with its artistic vision. Its artistic design choices fit in well in terms of both the presumed narrative as well as the gameplay style. For a title that was originally released in Japanese arcades in 2001, the game still looks great. In addition to the art style and aesthetics, the game’s audio is another treat, with a solid soundtrack and fitting sound designs. Lastly, the Nintendo Switch version of Ikaruga allows players to play with a vertical screen orientation, the way the game was originally intended to be played.

Overall, Ikaruga remains a treasure in the shoot ‘em up genre due to its tight gameplay, challenge, and overall design. While the game continues to stifle me at multiple points, its smart design and ease of entry keep me coming back for more punishment. While I missed out on the title on the Nintendo Gamecube, I can safely say that Ikaruga will remain on my Nintendo Switch to challenge me for the foreseeable future.