Hidden Agenda Fails To Rekindle The Magic of Until Dawn

Stories in games have come a long way in the past few years. Titles like Firewatch, Life is Strange, and Supermassive’s Until Dawn have pushed video game narratives away from bad action schlock, and towards the realm of the respectable.

Until Dawn is arguably one of the most successful, sending up the teen horror genre with both electric style and quality performances. It’s a game I still think about two years later, so naturally, I jumped at the chance to check out Supermassive’s next project: Hidden Agenda.

This time, you play as young detective Becky Marney and district attorney Felicity Graves who are investigating the handiwork of a serial killer called The Trapper. The heavily choice focused narrative carries a lot of weight, and seemingly minor choices can quickly snowball into deadly situations.

There’s a good deal of variation to be seen depending on your choices – including endings where the killer actually gets away – a nice change of pace from games that have infinite choices yet all lead to a single conclusion. That said, the game doesn’t manage to create anything resembling tension as you play, with most people I tested the game with being firmly in the *shrug* camp.

The same motion capture tech from Until Dawn is applied here with an additional layer of smoothness, but some of the faces lean a bit close to uncanny valley territory. Also, while it’s raining for a good deal of the story, everyone is weirdly drippingly wet. The actual acting is all over the map too, with some scenes coming off as believable while others are beyond hokey.

Character development is a bit thin, and I found myself questioning motivation and goals quite often. That said, the game is ultimately about projecting your own perceptions onto the characters and situations laid out for you, so the choose-your-own-adventure level of character exploration was more or less expected. Put down your controllers – Hidden Agenda is played exclusively with your phone. Using the Hidden Agenda app, you’ll use your phone screen as a trackpad and drag a little-colored dot around the screen to interact with the game.

Bluntly, this method of interaction is trash compared to a good ol’ controller. There’s a noticeable lag, and the format limits interactions to the indirect. It’s a definite step back from Until Dawn’s use of motion sensing and left me feeling pretty disconnected from the narrative. The most enticing aspect of Hidden Agenda is actually multiplayer. The story can be played with multiple people voting on the choices, which can lead to some interesting discussions about how to proceed depending on how stubborn your group of friends is. It’s much more social than your average video game, and the effort to push outside the norm is commendable.

For the competitive crowd, there’s also an adversarial mode for which the game is named. In the mode, one player is given a hidden agenda they need to try and complete. Sounds fascinating, right? It is, but in practice, it mostly lands with a thud. The hidden agendas are dropped in throughout the game, but only really make any sense whatsoever at the very end of the story. Many of the goals are totally peripheral to the actual story – I have literally zero interest in making sure Becky pisses someone off. Beyond that, the implementation is super disruptive. Nothing destroys the tension of a scene quite like an annoying narrator letting everyone know that this is the big decision that will decide the outcome of a hidden agenda. I get the intent, but it’s an absolutely baffling design choice. To truly breed suspicion among the players, the hidden agendas should have played out over longer periods, and been more relevant to the story at large. Also, the narrator needs to go. Don’t tell me that you’re about to resolve a hidden agenda.

At the end of the day, Hidden Agenda is a pleasant narrative with some interesting ideas that don’t exactly pan out. It falls short of the high mark set by Until Dawn, but give points to Supermassive for trying something new instead of pumping out a clone of their last game. That said, I wanted another Until Dawn. In a densely packed genre, there are plenty of titles players should look into before considering Hidden Agenda. 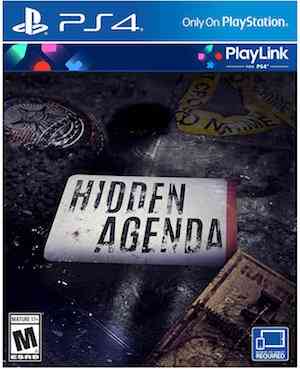 The Dark Pictures: Man of Medan – 9 Minutes of Tense Gameplay