Born out of point-and-click adventure games, the escape room sub-genre is one of the rare types of games that have spawned real-world counterparts. Maybe that’s a surprise to you; it was to me. Given that we have real-life escape rooms, translating these types of games to VR seems a given. That’s exactly what EvilPort has done with Escape Room VR: Stories. Will I escape, or will time run out?

Escape Room VR: Stories is a collection of three different rooms to escape connected by an overarching plot. Well, the stories go together as long as you know the correct order in which to tackle the rooms. Unfortunately, the game doesn’t outwardly start you at the beginning of the story, but here’s a hint: it starts with “D” and ends with “irty Money.” At various points, the game will cut away to more of the story, shown as cartoon panels. It’s slightly jarring at first, as it comes without warning, but it can be a welcome break. Why is it a welcome break? Each room also comes with a time limit of 30 minutes. Thankfully, watching the story elements does indeed pause the timer.

So, three rooms and a 30-minute time limit for each. That means, at most, we’re talking an hour and a half of play time? No, not at all. You’ll likely be spending much more time than that. In fact, I spent an hour and a half alone on the first room I tried. It is possible to get through under the time limit on all the rooms the first time, I would suspect, but there are also three different possible endings depending on the number of secrets found. That’ll keep players busy for multiple attempts, but the amount of time needed to get through on subsequent attempts decreases exponentially. Bottom line, it’s not as quick as it might seem beforehand.

“Overall, Escape Room VR: Stories does offer up some really excellent puzzles and problems to solve and investigate.”

Let’s talk the puzzle elements. This is a real strong point with Escape Room VR: Stories. Nothing is really too easy and, at the same time, nothing is so hard that you find yourself standing around not having a clue what to do. Okay, I did stand around a bit once, but that was because I fell into the point-and-click adventure game trap of thinking I had thoroughly checked something out, when it turns out I did not. My bad; even having just finished a bunch of these things recently, I still do it. Oops. But, overall, the puzzle design is excellent. They are clearly well thought out and, with a little thinking on your end, should be achievable, although it’s very easy to burn up too much time when you first encounter some of them.

The puzzles are the good part, now here’s the bad: controls. Each Vive controller mimics a hand. The problem I encountered was that, at times, my hands in game went rogue, and not in a “lost tracking” kind of way. They would make movements occasionally that did not correlate to what I was doing. The next issue became picking up items. Picking them up was actually rather easy. However, things never picked up the way I wanted them to. Keys were some of the worst offenders, as it seemed no matter which angle or direction I tried to pick them up, it was always backwards. This led to lots of time wasted simply trying to manipulate the objects. That was no easy task either, and even the simple act of opening doors or turning said keys seemed over exaggerated, which led to over-twisting of my arm into sometimes uncomfortable positions.

The last issue is one of movement within the room. Normally I am 100% okay with just simple teleport movement. Escape Room VR: Stories does make use of room scale, but at times it doesn’t make up for the difference between where you teleport to and where you need to go. Speaking of the room scale, my old nemesis the floor was a factor as well. I seemed to be properly aligned height-wise to the room, but upon dropping a paper on the floor when a cutscene jumped out at me, I found it was just slightly off. Which meant the paper sat there taunting me on the virtual floor, blocked by my actual floor till I let out a sigh and restarted the level, unable to continue without it.

Overall, Escape Room VR: Stories does offer up some really excellent puzzles and problems to solve and investigate. Which is actually one of the more enjoyable aspects — it’s not so much about escaping as it is getting what you need and leaving in time. A slight variation, but a good one. The visuals are solid as well. The biggest issue it faces is in controls and movement. Too often I found myself spending more time fighting either element or the floor, than I spent solving the puzzles. I can see how touch controllers would be far more beneficial in most of these areas compared to the Vive Wands, but there should be a way to compensate for the difference, even if it is just altering the height a bit. Some clean-up in this area can really make the difference being okay overall and being quite good.

** Steam key provided by the publisher ** 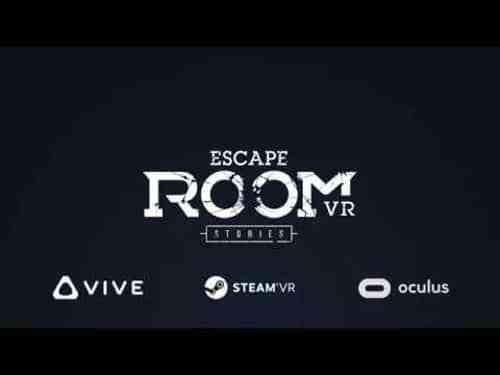