“Indie puzzle platformer” has a certain connotation attached to it, right? We picture tricky games with quirky gimmicks meant to help each title stand out from the crowd. Then there’s the impossible-to-parse story told in snippets of dialogue or hidden collectibles and the unique art style. Embers of Mirrim is not an indie puzzle platformer. It’s indie, and there are puzzles, but it’s something different, something we haven’t seen in quite some time. It’s first and foremost a platformer, and its challenges are almost 100% skill based. There are puzzles, but most of your time with Mirrim will be spent building your – not your character’s – abilities.

Embers of Mirrim takes place in a bizarre world populated by equally strange flora and fauna. We’re introduced to two races of lizard-wolf creatures that seem to have a great deal of animosity towards each other, despite their similarities. They both respect the same oracle, a cat-like beast who warns them a corruption from space is coming, and if left unchecked, it will destroy everything. What follows is a sparse tale of two enemies coming together and realizing their differences aren’t important, and all that separates them from death is each other.

The tutorial does a great job of teaching the basics and then quickly getting out of the way. You begin by playing as one of the dark wolves, learning its movements, then switch to a light wolf. The dark wolves are more powerful, and the light wolves are more agile. Each is able to transform itself into embers, which allows them to move in any direction over a short distance. Soon, events transpire, and your light and dark wolves find themselves merged together into a single super-wolf with all the powers of both. This also means you can turn into both light and dark embers, controlling each independently with the two joysticks.

“Even on Easy mode, this is a difficult game”

This is where the real challenge begins. Essentially, you’re controlling two characters at once, and it’s a completely different experience than what you find in a typical platformer. Holding the left and right triggers releases your light and dark embers, respectively. The left stick controls the light embers, the right stick controls the dark. To progress, you will frequently need to cross over large chasms or through complex mazes, making sure to pass through ember-recharging pods or risk running out of energy and being transported to the start of the sequence to try again.

And believe me: you will have to try again. And again. Even on Easy mode, this is a difficult game. The gliding and ground-pounding your lizard-wolf can do will come naturally to all but the newest gamers, but controlling your embers through gauntlets of traps is something else entirely. Some areas simply require you to get from point A to point B, the trick being your need to pass through light and dark ember rechargers to avoid running out of power. Other areas are giant mazes where your embers are separated, and you must move together to find the exit (as separating too far will send you back to the beginning). Embers of Mirrim does throw a lot of repeat sequences at you, which is unfortunate, but the unique moments more than makeup for it. There are also occasions when foreground obfuscation makes platforming trickier than it should be, a minor case of aesthetics hindering mechanics. Checkpoints are numerous, and only rarely did I find myself sent farther back than seemed necessary, but you are almost certain to find sequences that test the limits of your patience. There are also a handful of interesting boss fights that use your abilities in some cool ways and allow you to put your newly developed skills to the test. These will also test your patience, but never in a way that feels unfair.

This is a point in the game’s favor, however. So many indie platformers depend on their gimmick to solve puzzles that the entire genre has been a bit stale for some time now. Embers of Mirrim uses its gimmick to test your ability as a gamer, not your ability to muddle through complicated riddles or box-pushing. To get through this game, your hand-eye coordination will have to be on point.

“Mirrim’s puzzles stumped me, left me scratching my head, and then made me feel like an idiot when I figured them out.”

Beyond its tests of hand-eye aptitude, Mirrim does feature a few puzzles that use your character’s powers in a variety of ways. Most of them revolve around manipulating wildlife by using either your light or dark ember, as creatures respond differently depending on the ember that touches them. I’ll say this; there are games with puzzles that stump you, that leave you scratching your head, but then create a crystallizing moment when it all comes together and makes sense and you feel like a bonafide genius for solving them. Mirrim’s puzzles stumped me, left me scratching my head, and then made me feel like an idiot when I figured them out. It’s hard to explain. Crafting effective puzzles is a tightrope walk between too simple and too obtuse, and unfortunately, there’s just something off about the balance here.

As impressed as I am by the central mechanic and the fun challenge it presents, I was underwhelmed by the visuals. Not that the relatively low-poly models are a problem; it’s more a sense of sameness that pervades the environments. You’ll make your way through a rocky area, a forest or two, and then end the game with a few levels of dark rocky cliffs. There’s not a ton of visual diversity, which is disappointing. Embers of Mirrim is also fairly short. You should be able to complete it in under four hours. I don’t find that to be a problem, personally, but it’s worth noting. Your brief time spent with the game will be accompanied by a surprisingly good soundtrack, however, each song fitting the scene and the action superbly.

Despite my quibbles about the puzzles and the sameness of the environments, Embers of Mirrim left a strong impression on me. It’s not going to change the trajectory of indie platformers, but it’s a solid game with an engrossing central mechanic that, once mastered, will make you feel like a gaming god. 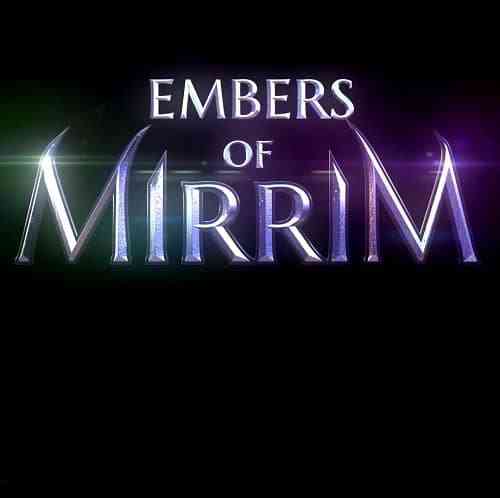