To those of us who are cat people, we all know just how noble and proud our feline friends can be. Regardless if they are tearing apart a paper bag, hunting a bug, or simply sleeping in some ungodly shape, cat’s are still regal and majestic creatures. So it comes as no surprise that a game would be made to thrust our furry friends into an RPG experience of epic proportions: Cat Quest. As silly as it may sound, Cat Quest takes this simple and unique concept and delivers an experience you would not believe in all nine of your lifetimes.

Developed by The Gentlebros, Cat Quest is a 2D top down action RPG that manages to balance an incredibly adorable amount of charm with a functional RPG experience. Players take control of a nameless cat – the strong and silent hero – on a quest to save his sister from the clutches of the evil cat Drakoth. Drakoth has the ability to summon dragons which were once thought long since gone, and could only be defeated by the Dragonblood, cat warriors with a special mark. The evil cat has agreed to return your sister if you can defeat each of the dragons he has sent to plague Felingard.

The game is littered with cat puns, and it’s done in such a way that it can’t help but make you smile. Dialogue takes every opportunity it can with words like pawtner, lightnyan, and godcatit, to name a few. While the overall tone might seem childish at first, the way this game handles with its simple RPG elements and fast paced combat is definitely no slouch. The developers have cited Legend of Zelda, Final Fantasy, and Skyrim as inspirations for this game, which explains why I found myself saying repeatedly “just one more quest” long into the night. In fact, I found myself struggling to decide if I should write this review or sink several more hours into the game because I didn’t want to stop playing. 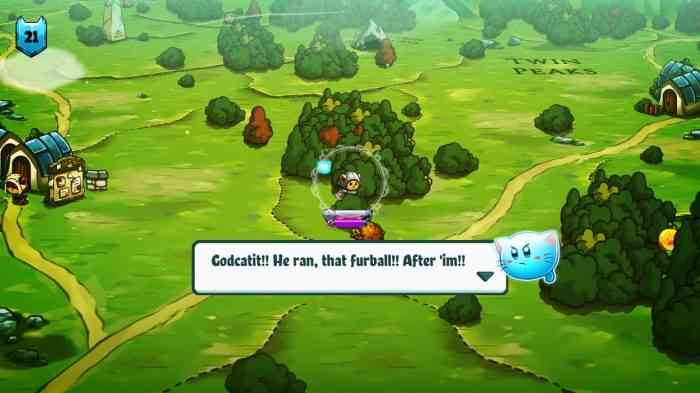 The controls are a breeze with basic movement, attack, and dodging abilities. Magic spells can be unlocked as you discover each of the mage towers, and any tower will give you the opportunity to upgrade your spells strength for coins. Players have four spell slots for magic to use on the fly, but it is easy to swap between the various options. There are four stats for players to manage: Health, Armor, Attack, and Magic. Each of these is affected by the armor and gear your catventurer equips, with some items offering buffs in two areas and others offering one serious buff and one serious debuff. The strength of these stats is very noticeable in gameplay with a high attack or magic skill doing huge damage against enemies, and your armor bar – which regenerates when not attacked – being a life saver.

“Cat Quest manages to balance an incredibly adorable amount of charm with a functional RPG experience.”

While completing quests will earn you gold and experience points to level up, you can also receive gear as a reward or find more random gear in dungeon chests. Any gear you discover that you already own will automatically upgrade that item a few levels, so it’s important to keep an eye on what you have to keep your cat at the top of his game. This also means that level one armor you discovered at the start of the game could end up being your strongest piece of armor down the road, which is great because all of the weapons and armor you can equip just looks fantastic. 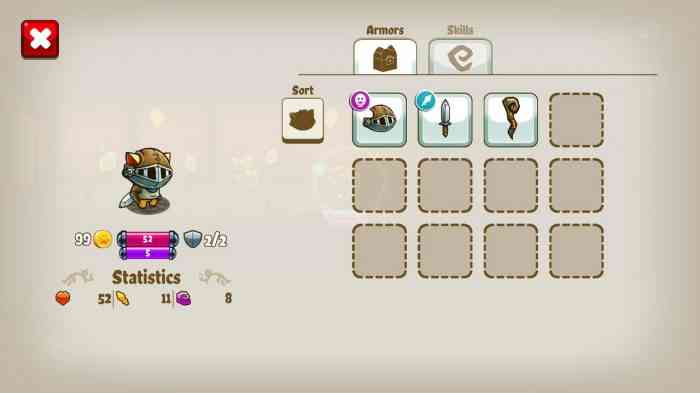 The cartoony presentation is quite unlike anything I have encountered before. Everything is a 2D model but still pops off the screen with fantastic detail and coloring. The sound for this game is masterfully paired with its visual presentation, offering great effects for attacks, spells, enemies, and conversations as well as appropriate traveling, combat, and town music. It does everything it can to instill the strongest stereotypical feeling of any given situation while still avoiding being cliché or tired.

“Cat Quest is a delightfully charming experience, one that people may overlook as a kids game, and they would be sorely mistaken.”

The game is displayed on a larger world map, a technique usually done for traveling quickly between larger areas in a game. Cat Quest, however, uses this as the main setting and, despite seeing how small the map seems at first, it’s actually deceptively large. The further you get from the Catpital, the stronger enemies will be. I haven’t been able to find my way to the far side of the continent yet, but already I find myself encountering a variety of enemies that require different tactics to defeat. You can’t win by simply connecting with attacks over and over, you’ll need to learn what strategy works the best for you, even if that means fleeing to the nearest town for a catnap to regain your health and jump back into the fray.

Cat Quest is a delightfully charming experience, one that people may overlook as a kids game, and they would be sorely mistaken. It has depth, an intriguing art style, some wonderful dialogue, and a compelling combat system that – when combined with everything else it has to offer – delivers a game that is hard to put down. The games equipment system means even low-grade beginning gear has the potential to become your greatest asset later in the game, so nothing goes to waste, and its AAA inspiration is present throughout every stage. 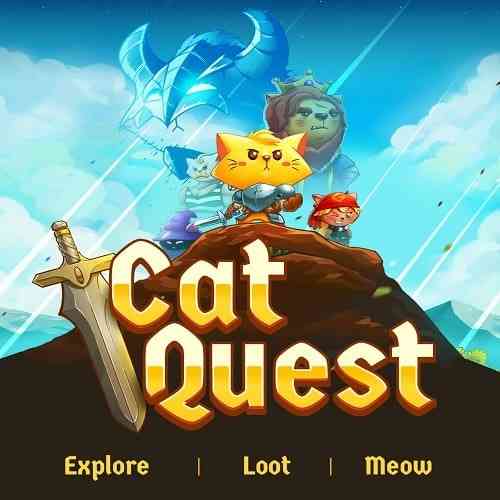