After the disappointment that was Call of Duty: Ghosts, the franchise rebounded in a big way last year. Call of Duty: Advanced Warfare set the ship right by delivering a brand new exoskeleton mechanic. It fundamentally changed the way we played what had become an all too familiar game. Locking up Kevin Spacey to play a lead role certainly helped the series gain some credibility back as well. Granted, the record breaking sales weren’t there but there is no question the franchise restored some confidence which may have been lost a couple of years ago.

Knowing that the exo suits and Spacey were off the Black Ops 3 roster, I was skeptical going in. Without a star studded Hollywood cast or the amazing exo movements, I questioned how Black Ops 3 could possibly continue the upward trend. With a yearly Call of Duty release surely we will see more than just a few new weapons, new maps and a gimmicky horror characters, right? With three years development time, Treyarch has definitely brought the goods as this year’s installment has been super-sized.

“With a 9-10 hour single player campaign, a 14-hour or so nightmare mode (unlocked when you complete the campaign), 12 maps out of the box (13 if you include the bonus Nuketown map), a zombie mode and the twin stick dead ops arcade game, Black Ops 3 is an incredibly robust package.”

With a 9-10 hour single player campaign, a 14-hour or so nightmare mode (unlocked when you complete the campaign), 12 maps out of the box (13 if you include the bonus Nuketown map), a zombie mode and the twin stick dead ops arcade game, Black Ops 3 is an incredibly robust package. Treyarch clearly didn’t hold back and for me this feels like the largest Call of Duty game I have ever played to date. Sure, it still plays and looks like CoD, but on sheer size alone, Black Ops 3 is superb value for the buck.

While there aren’t any ground breaking innovations this year it doesn’t mean Treyarch hasn’t brought enough ‘new’ to the table. Treyarch has a track record of knocking CoD games out of the park and this year is no different. Within this futuristic beefy package there is a new chain based fluid movement system, of course new weapons, swimming is now included in the multiplayer game, there are new playable specialists in multiplayer, a slick gunsmith, new online mode, new special abilities, the ability to play the entire single player campaign cooperatively and some new surprises in the zombie mode. Bottom line, Black Ops 3 will resonate with fans and is plenty of reason for those who have strayed from the franchise to come back with confidence.

If you’re like me, the single player experience is your first stop. When comparing this Call of Duty campaign to previous CoD single player campaigns, Black Ops 3 is a deeper and longer experience. It remains fairly linear as it has you moving from one gigantic set piece to another, but is much more open featuring different channels and vast open areas to trudge through by yourself or with three other buddies. With the ability to play 4-player co-op, those tight corridors from previous Call of Duty games aren’t exactly gone but minimized significantly. It’s refreshing, making for an experience best played with others.

The story itself is a mind fuck as the ending alone will have you questioning what in the blue hell just happened. Previous Treyarch Call of Duty games featured branching storylines, but his time around there is one core story that takes so many twists and turns it will make your head spin. Think Inception meets Black Hawk Down; that is really the best way to describe it. It’s a compelling story and I found myself genuinely interested in the outcome.

While there is no question Treyarch gives us a deep single player experience with a dynamic storyline we have been craving for years, Black Ops 3 seems like a bit of a throwback. There are quasi boss battles, punishing enemies that are a bitch to take down, it’s not a breeze to play on Hardened difficulty and by the time it is all said and done, your kill count is massive. There are hidden collectibles that are truly hidden and slick Safehouse you visit in between levels to customize your loadouts, throw on new wardrobe items or unlock Cyber Cores (special abilities to use in battle). In the Personal Data Vault located in the Safehouse you can also play the twin stick arcade game, Dead Ops 2, which features a first person view at times. Dead Ops is simply a blast and a mode I kept coming back to in order to surpass previous scores and levels. It can be tricky to find this little Easter egg, so the only advice I will give is to look around the Personal Data Vault carefully. Overall I consider the single player aspect of the game a success, even as the gameplay itself remains largely the same. You’ll man the odd turret as you race through levels gunning anything in sight, there is the familiar upgrade/progression system, controls feel the same, and swimming sequences are thrown into the mix as is a flying sequence. It has a ‘been there and done that’ feeling, yet the spatial design and larger environments make this Call of Duty feel like you have more freedom and in the end it gives Black Ops 3 added re-playability, allowing you to engage battles differently each time.

Once you finish the campaign, you unlock the Nightmare mode which is a completely different narrative that takes place in the levels you completed throughout the campaign. With zombies added to the mix, this mode is yet another little Easter egg for fans. If you even wanted to play a Call of Duty campaign with zombies in it, Nightmare mode gives you exactly that.

I’ll admit, my first impressions of the multiplayer aspect of the game weren’t great. Aside from getting my ass handed to me, I was immediately missing the exo suit movements and mechanics, but after a few matches, I started to find my rhythm. The multiplayer game remains silky smooth and what really jumped out at me was the balanced and vibrant nature of the maps. Aside from being visual stunners, the maps are beautifully laid out. While Advanced Warfare’s multiplayer game seemed like Call of Duty on crystal meth, Black Ops 3 plays like a smarter and more strategic multiplayer experience.

“With many multiplayer modes and 12 maps out of the box, Treyarch gave Black Ops 3’s multiplayer game the time and attention it deserves.”

The return of the Pick 10 create a class system is back, as is the familiar XP system. New to the online game is the chain based movement system where controlled thrust jumps, fast slides and fast mantling capabilities can be strung together in a multitude of combinations. What’s slick about the movement system is that you have complete control of your weapon at all times. Maps are designed with this in mind leaving you with a feeling of power in how you use the environment tactically. It takes some practice in the beginning but once you have mastered its use, you are turned into a deadly killing machine. If you’re struggling with the movement system, jump into the Freerun mode where you can work on mastering the new system against the clock.

With many multiplayer modes and 12 maps out of the box, Treyarch gave Black Ops 3’s multiplayer game the time and attention it deserves. CoD staples like Team Death Match, Kill Confirmed and Domination return. Capture the Flag also returns, as does Search and Destroy, Uplink and Hardpoint. Black Ops 3 introduces a new mode called Safeguard which is essentially another attack and defend mode where the attacking team has to escort a robot drone into the enemy’s team base. I’m not convinced this mode will stick but kudos to the development team for introducing at least one new mode this year.

I should also mention Black Ops 3 also supports local multiplayer which is something most AAA games have ditched in recent years. It merely adds to that old-school feeling where you and some buddies can get together and play COD on the couch. When it comes to zombies in Call of Duty games, nobody does it better than Treyarch. Black Ops 3 marks the return of the fan favorite mode and once again it is as punishing as ever. This zombie mode is a 1940’s jazz age inspired mode featuring Ron Pearlman, Heather Graham, Jeff Goldblum and Neil McDonough. Within minutes you quickly learn that teamwork and working cooperatively is the key to survival. Admittedly, I suck at zombies and never managed to make it past round seven. Much like the zombies mode from the previous Treyarch entries, I enjoyed it and those who loved previous zombie modes will enjoy this one too.

Visually, Black Ops 3 is stunning, highlighted by some amazing character animations and brilliant level design. If the draw distance in this game doesn’t impress you, I don’t know what will. Characters look incredibly lifelike and stand as significant improvements over previous franchise entries. Likewise the enemy AI, including the menacing robots, also feature an incredible level of detail. The lighting, smoke and fire effects are spot on. The frame rate was solid too. There is really isn’t much I can say other Treyarch nailed it in the graphics department. Sound wise, Treyarch did a magnificent job with the soundtrack. Slap on your favourite headset, crank up the volume as Black Ops 3 soundtrack is memorable and lasting. I found myself humming the tunes, hours (even days) after playing the game. It’s that good. Sound effects and weapons all pack a punch. Yup, it sounds like more of the same old in many areas but regardless it’s not a game where you will hear any major flaws. Even the voice acting is believable and loaded with emotion.

If a definitive all-encompassing Call of Duty experience is what you are looking for, you have come to the right place. This year Treyarch has managed to throw down the Super Bowl of Call of Duty games. With two full story campaigns playable with up to four players, an action packed multiplayer experience, an addictive little twin stick Easter egg gem and a punishing zombie experience, Call of Duty: Black Ops 3 is hands down amazing value for the buck. While everyone is losing their minds over Fallout 4 hunkering down to say goodbye to their family and friends for the next few months, Call of Duty fans could easily do the same as the amount of content in Black Ops 3 will suck your life away for months. 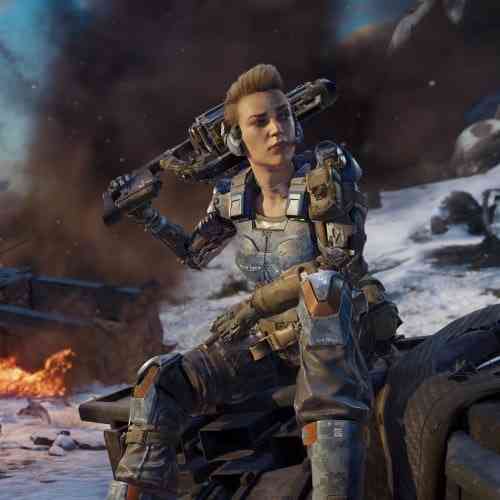 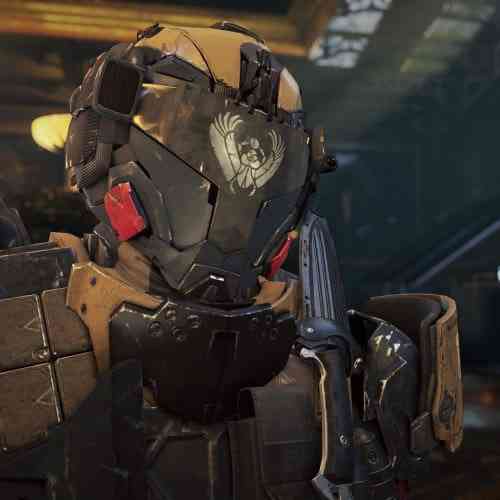 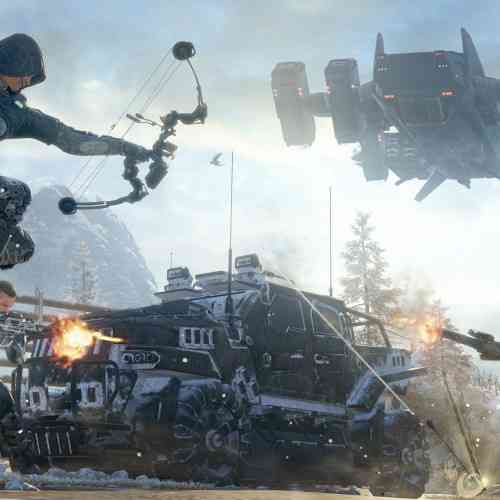 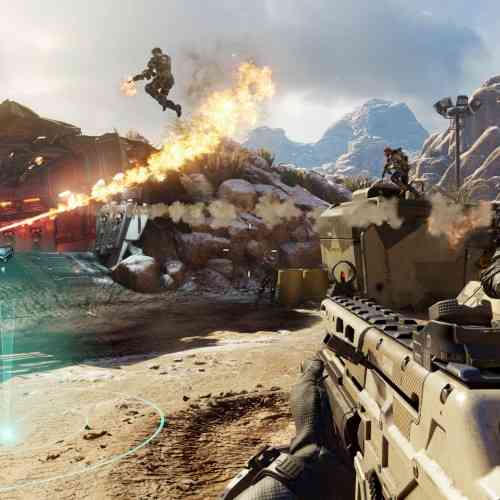 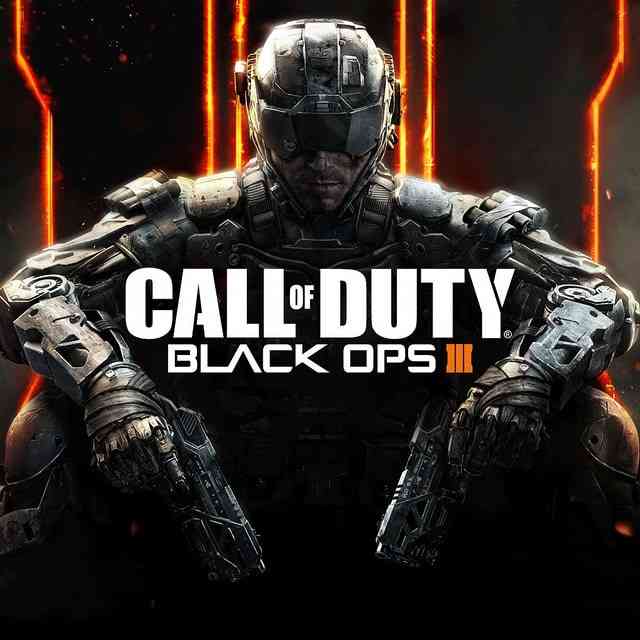