Video games have come a long way. We now have titles that let us fully create and customize entire alien races, tweak and perfect our arsenal, level small cities, and we are presented with complex moral decisions that will affect the very outcome of a game. The precursor to all of this, of course, are the classic 8 an16-bit adventures we grew up with: exploring dungeons, saving the princess, discovering the magical thingamajig, and hearing delightful chimes of success much like hitting a jackpot in Vegas. Alwa’s Awakening was inspired by this classic experience that fewer and fewer of today’s gamers had the privilege of experiencing, and it delivers the same retro joy we know and love with fond memories of sitting in front of the old cathode.

Developed and Produced by Elden Pixels, Alwa’s Awakening sees you take control of Zoe, an everyday girl who simply loves video games. One night after a long period of gaming, she awakens in the unknown and mysterious land of Alwa where she first encounters a strange old woman. This woman tells Zoe that she is, in fact, the hero they have been waiting for to save the people of Alwa from the impending darkness that has plagued the land. It isn’t a game that tries to reinvent the wheel but instead offers something with the right level of familiarity to keep players happy and engaged.

Zoe is tasked with defeating four powerful entities armed only with her magical staff. As you progress through Alwa, Zoe will learn new abilities with her staff that will allow her to explore, attack, and defend in new ways. Rather than constructing a giant map to progress through, Alwa’s Awakening instead provides tightly knit, interconnected dungeons and locales with very few loading screens. This means Zoe can start on the edge of a ruin, walk through some caves, and find her way to the town of Westwood or even the Amber Sacellum with only one loading screen for a few moments. Completionists need to be patient as there will be collectible gems just out of reach scattered throughout the world, and Zoe will need to return later with new powers and abilities to reach them. It’s actually refreshing to travel through the previously completed dungeons to get to the other side, but there are teleporters conveniently located outside major locations for easier traversal.

“Alwa’s Awakening is classic gaming for the modern gamer and an incredibly enjoyable experience.”

Elden Pixels set out to create an experience both new and familiar with classic NES-style gaming and you can see the passion they put into recreating that experience. Level designs are simple but quickly challenging, animations are classic but don’t feel dated, and the general feel is superb. Zoe controls fantastically, her attacks are smooth and fast, and her jumps depend on how long you hold the button down. Alwa’s Awakening also doesn’t hold your hand or give you advice, much like the old NES titles. You are thrown into whatever situation lies in the next room and you have to figure it out as you go along. It’s a pleasant experience to not have your hand held through the game and it helps you feel immersed in the experience, as your next challenge is as fresh and new to you as it is to Zoe.

In keeping with the theme of a retro experience, Alwa’s Awakening has a beautifully familiar soundtrack. You can almost forget you are using a monitor and picture this game running on an old tube TV with the deep-set built in speaker, and I mean that in the best way. It has that sort of vintage scratch that tickles your nostalgia as Zoe moves from place to place and the music flows out to set the right tone. Jumping, combat, interactions, every sound was carefully selected and it shows. The classic pops, dings, and other 8 bit associated sounds draw you into the experience and makes you want to keep exploring. When it comes to the combat aspect, Zoe has three hit points throughout the game. Enemies will drop hearts to restore health but it doesn’t take much for her to fall in combat if you aren’t careful: poorly timed jumps, ranged enemies, and the odd sun-shaped enemies whose projectiles can move through solid objects can make it difficult to survive sometimes. Thankfully, Zoe has unlimited lives, death simply putting you back to your last save point. When you do meet your untimely demise, however, and you are greeted with the option to continue or quit, you also come face to face with your Death Counter. Now, this isn’t exactly a new feature to video games, but something about being forced to see that number thrown in your face makes you vengeful at your own death like you have to prove to the game you can beat it. Trial and error, of course, will make that death counter increase pretty quickly, with my number currently sitting at a probably embarrassingly high tally.

Alwa’s Awakening set out to give gamers an all new classic experience and it absolutely succeeded. With nearly seamless load times, interesting level design, familiar side-scroller puzzle solving mechanics and a vintage-style soundtrack, this game hits all of the marks. Even the story has that comfortably familiar feeling of an NES title that gamers would discuss fond memories of. It finds an excellent balance between being relaxing yet challenging and is sure to be a necessity for fans of classic gaming. Alwa’s Awakening is classic gaming for the modern gamer and an incredibly enjoyable experience. 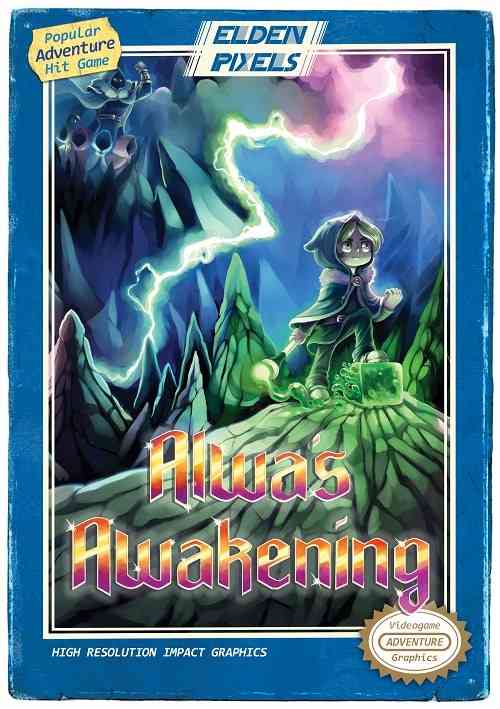