Welcome to Cypress Knee – a small town in the deep South, where a friendly smile hides a murderous intent, the stink of corruption hangs in the air like swamp fog, and nothing is what it seems. From indie developer Prologue Games, Knee Deep has been on Steam since 2015, and now it has finally arrived on consoles. Its sub-par visuals and cut-rate production values might seem a bit out of place on the latest-gen gaming machines, but its interesting, well-crafted story makes it worth checking out.

Knee Deep is a noir murder-mystery adventure, set in a small backwater Florida town. Just like the fetid swamps of South Florida, Cypress Knee’s quiet surface hides plenty of secrets in its murky depths. You play three roles in the story – vapid blogger Romana Teague, grizzled local reporter Jack Bellet, and private investigator K.C. Gaddis. The roles switch at various points in the story and give you different angles on the unfolding mystery you have been tasked with uncovering. The game starts with what will be the central focus of the narrative – the death by hanging of an actor in town for a movie filming. At first glance, it seems like the textbook suicide of a washed-up celebrity – but of course, the story evolves into something much more.

“Its sub-par visuals might seem a bit out of place on the latest-gen consoles, but its interesting, well-crafted story makes it worth checking out.”

Gameplay is very much akin to Life is Strange or the Telltale games – in particular, the way you go around, interviewing locals for information reminded me of The Wolf Among Us. A difference, and for me a bit of a disappointment, is that your agency as a player is much more limited in Knee Deep – you can merely ask a few questions of each individual and then you are whisked off to the next location; the game lacks in the areas of collecting of physical clues, quick-time events, or close observation of the environment that made some of my favorite investigation games, like LA Noir, so great. Dialogue also offers only a few options most of the time and they are vague. However, there is the option to give random responses, or cynical responses, and it was fun to see what effect each one would have.

Instead of collecting clues, Knee Deep adds a new twist, in which you report on your progress by making blog posts, articles or reports, depending on which character you are playing at the time. You must make choices as to how inflammatory or safe you want these to be, and what angle you want to emphasize. How you craft these periodic updates has an effect later on in how characters react to you. I liked this idea in theory, but I just wasn’t always sure how my choices would matter in the future. Yes, I may have made someone angry, as the game told me, but how that would come back to haunt me later wasn’t clear. In addition, a few puzzles are offered here and there; while they were clever and fun, they were too few and didn’t quite succeed in mixing things up enough. For the most part, the gameplay of Knee Deep could benefit from more choice and more variety, and I almost felt like I was on rails at times. 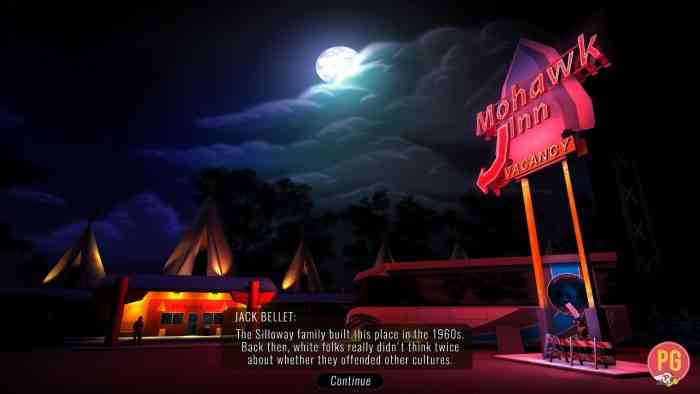 The developers have chosen to present Knee Deep as a theatrical production, with all of the action taking place on “stages,” complete with spotlights and backdrops. This unique approach is certainly innovative and refreshing; however, I sensed as I played for a while that there were some, shall we say, more practical reasons for this choice. First off, the visuals – especially on close examination – are lacking and decidedly not latest-gen. Character models are crude, and their movements are mechanical. Lips move out-of-sync with dialogue, and I often saw my protagonists stop mid-walk, robotically turn to the left, then continue walking – it all sometimes killed the realism and I felt myself pulled out of the story at times by Knee Deep’s uncanny valley issues.

Having the game present as a stage play clearly allowed the devs to hide a lot of the game’s shortcomings. Most of the “stage” is bathed in darkness, with spotlights focused on the particular set you are on at any given time. This helps to hide the game’s lack of environmental detail. Having the player be an “audience member” in this theatre also allows the game to zoom pretty far out most of the time – again, it’s a smart “trick” that keeps you from focusing too much on the graphical flaws. I see why Prologue Games did it, and it mostly works. Mostly. But sometimes, when the action zoomed-in, I got – pardon the pun – a peek behind the curtain, and like an actor without his makeup on, Knee Deep’s mediocre visuals were exposed.

“This game’s strength is in its writing – the snappy dialogue and quirky characters will make you forget its flaws.”

Knee Deep aims to make up for its lackluster visuals with strong music and voice acting. Musically, it mostly succeeds, with pretty cool music accompanying the action of the game throughout. There were times when I felt it could slow down a bit, or get quieter, to match what was going on “on stage” more accurately. Voice acting is also strong overall, with character actors delivering lines with good timing, even if a few laid-on the “quirky voices” a bit too thickly. One technical irritation, though, was the echo effect that came with the stage presentation – it sounded at times like actors were speaking not on a stage, but from the bottom of a well – another little thing that kept me from fully investing in the Knee Deep’s world. 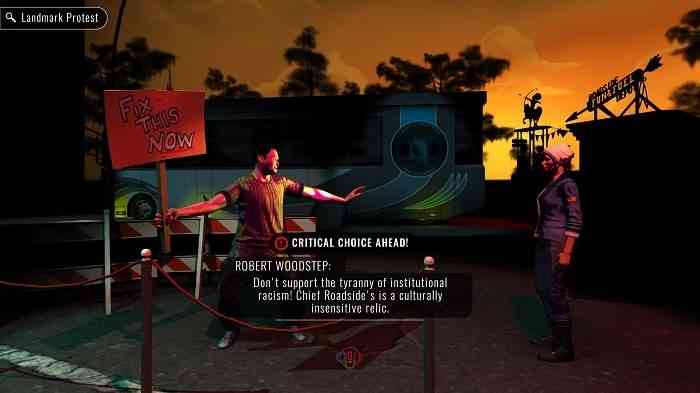 Story wise, Knee Deep throws a lot at you, and it is entertaining but not always easy to follow. There are many different threads to this game’s story, and they bring in plot points from all the many characters you will meet. In addition to the central murder mystery, this Twin Peaks-like Florida burg has extramarital affairs, government corruption, shady business deals, sketchy religious cults, and all the other noir tropes you would readily expect. If you truly want to keep track of it all, and especially how it all links together, I suggest you bring a pen and paper to Knee Deep. But I never found the byzantine narrative to be a deal-breaker; each scene was entertaining and the dialogue very well-written. If you don’t try to break your brain and understand everything you are seeing, Knee Deep is an interesting adventure that you will want to keep playing to the end.

Despite its basic visuals and limited gameplay, Knee Deep’s interesting, well-written story is worth the investment. This game’s strength is in its writing – the snappy dialogue and quirky characters will make you forget its flaws – most of the time. What many may take issue with is its relatively steep price for what is going to be a 4 to 5-hour experience for most players. If you can get past the cost, you’ll enjoy your time in Cypress Knee – just watch out for the gators. 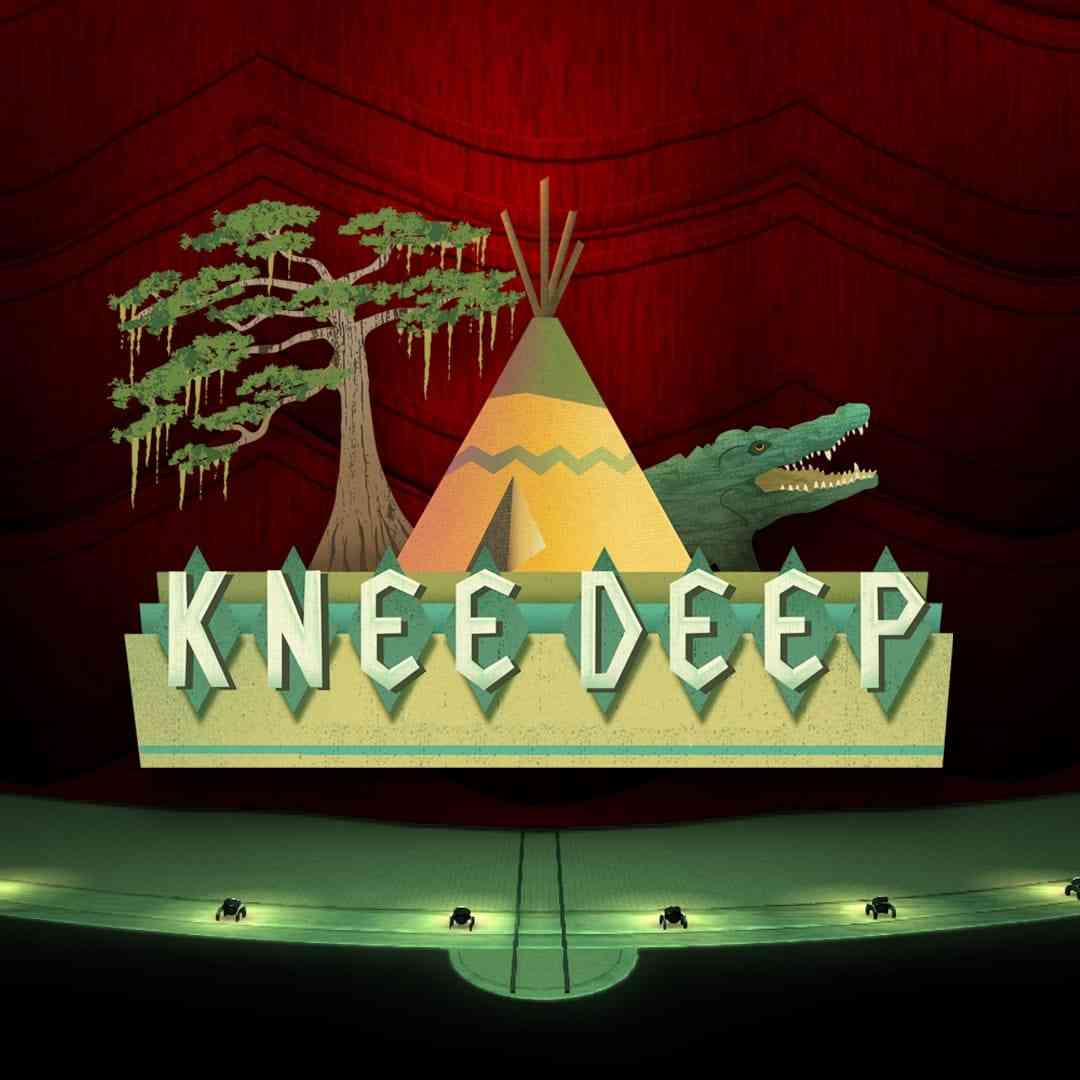 Twin Mirror Review – A Few Cracks in the Mirror

Surgeon Simulator Dev Looking for Fresh Start in 2021
Next Alwa’s Awakening Review – Retro NES Inspired Glory
Previous Tales of Berseria Review – Great for Fans, If You Can Get Past the Dated Visuals