Two people! Rebel Galaxy, a procedurally-generated space-sandbox game, has been developed by two people. Granted, contractors have supported the development of the game, but even so, this project has been wildly ambitious. Rebel Galaxy is the first game from Travis Baldree and Erich Schaefer’s two-man studio, Double Damage Games. These two gentlemen were founding members of the development team known as Runic Games, responsible for games such as Torchlight and Diablo. An impressive resume, and it shows.

As a fan of the show Firefly, I couldn’t help but draw a comparison between Rebel Galaxy and the immensely popular sci-fi show. This space-action RPG game features a large dynamically generated area of space in which you can explore. I should mention now that there is no form of multiplayer in this game, but I would count that as a positive. Rebel Galaxy is a solid single player experience. The game features great music, and a great space-western atmosphere. During my time with the game, I experienced a snippet of the story, which has more presence than I anticipated going into this. In the beginning, you kick off your adventures with a ship your aunt has passed on to you. You quickly gather that your Aunt also has additional important information to share with you at a spaceport nearby. Upon visiting the first spaceport, you’re introduced to the game’s dialogue system. Conversations in this game are comparable to something like Mass Effect. You can choose what to say, and what to do, but it’s less focused on a moral system. Upon completing a basic tutorial, the core of the game revolves around picking up contracts and odd jobs from numerous aliens and mercenaries with the objective of upgrading your ship to further explore space.

The various jobs I took on included battling space pirates, locating and returning missing cargo, escorting miners and occasionally hunting down particularly nasty baddies like space pirate captains. These missions can be acquired through a variety of sources, including bulletin boards and news feeds at space ports. Additionally, chatting with the locals in a space port’s bar can often lead to work and other interesting side stories. I came across a number of randomly generated events that reminded me of the game Red Dead Redemption. Often times I would encounter other pilots cruising around working on their own missions, and sometimes I could interact with them and learn a bit more of the game world. Other times I would just end up raiding them to steal their cargo. I’ve always dreamt of being a space pirate, so why not make that dream a reality now?

“The random nature of the sandbox world keeps you on your toes, and the ship customization is just in-depth enough to keep you engaged and excited about upgrading your space stallion.”

The best way to describe battles in Rebel Galaxy is to call it a ‘naval’ style of combat. Double Damage made a choice to have the game appear fully 3D, but ships generally stay on one track or rail so to speak. That said, smaller aircraft can zoom past you and over your vessel, but the idea here is that you are often aiming to strike with your broad sides, and if enemies do attempt to harass you from above, you shoot them down with your turrets. Often, I found it key to juggle between manually controlling my turrets and just letting them do their own thing. Manually controlling the turrets gave way for more accurate shots, but I could also be taking out way more targets if I just let them roam free while I navigated the asteroid belts aiming and firing at bigger targets with my broadsides. The game often keeps you on your toes, so don’t expect to win every battle. This is no cakewalk in space…if that makes sense.

Each quest will offer a risk level, so off the bat you have a rough idea of what to expect. I often enjoy a challenge, so I would aim for the higher risk jobs. I ended up struggling a fair bit until I became more closely acquainted with my ship and its weapons, but that’s really when I began to enjoy Rebel Galaxy. Picking up the tough contracts and diving into tense space battles is awesome, and navigating space in your own pimped out spaceship is really cool. As with most RPG games, you begin to find a sense of pride in your constantly improving gear. This is the same in Rebel Galaxy, and it’s even better when you can see your big spaceship improving as you take on tough contracts. 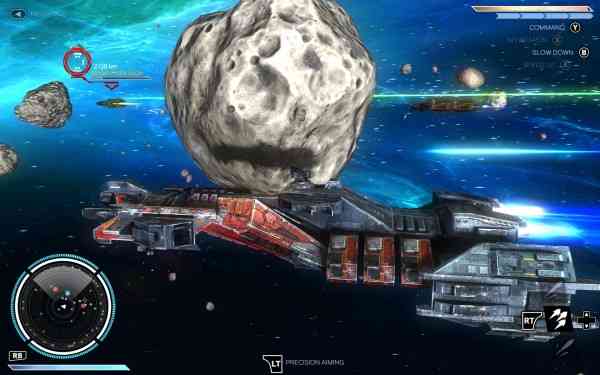 On paper, Rebel Galaxy plays like a lot of modern RPG’s. You accept quests, improve your gear and explore more challenging locations as you grow in strength. The atmosphere and theme, however, sets it apart from so many other games. The random nature of the sandbox world keeps you on your toes, and the ship customization is just in-depth enough to keep you engaged and excited about upgrading your space stallion. It’s my understanding that there is much more to the game than what I just saw with a few hours of game play, but I can safely say that Rebel Galaxy is on my radar for highly anticipated games. No space pun intended.

***Preview code provided by the Publisher***

Next DiRT Rally Hands-On Preview – Could This Be The Best Rally Game Since 2004?
Previous The Incredible Adventures of Van Helsing 3 Preview – Borgovia’s Final Call