As an ARPG enthusiast, I always wondered why I never tried anything from the Van Helsing series.  Watching gameplay from the previous entries looks slick and had received many positive reviews.  I guess I’m just a filthy casual who gives in to big name corporations and mainstream media (insert thick rimmed glasses)… or maybe I’m just broke and was just waiting for a free copy.

The Incredible Adventures of Van Helsing III is the final episode of the gothic-noire trilogy that starts off in Borgovia, a city recovering from a civil war.  Warring factions, criminals, and a cult run rampant and it is up to titular protagonist Van Helsing to take control of the situation.  Van Helsing is also on a quest to hunt down a former ally who betrayed him in the previous title.

Playing a preview build of the game I was allowed select two of the six playable classes, the Elementalist and the Protector, and play three quest zones in the single player campaign.  After choosing my character, and a quick story synopsis, I was immediately thrown into a mission for what I can only assume was somewhere in the middle-beginning?  I would have liked to have a tutorial or helpful tips before being attacked from all sides, which I imagine will be in the game when it launches.  However, when worse comes to worst in hack and slash games and you don’t know what you’re doing, left click until everything is dead usually works.

The combat in Van Helsing is responsive and very satisfying, more akin to Path of Exile rather than Diablo III.  Abilities look and feel powerful, and have some very interesting mechanics.  For instance, my Elementalist could create a wall of fire which I could control by dragging the mouse, changing its shape and length.  My favourite of the two, the Protector, has an ability to raise his shield, blocking all incoming damage in an arc in front of him at the cost of mobility.  Blocking damage causes the Protector to build a “revenge” meter, dealing a devastating blow to enemies when you decide to poke your head out from your defence (Floyd Mayweather minus the running around/bear hugs).   This gave me a feeling of nostalgia, hearkening back to playing Champions of Norath as a kid, blocking for several seconds until I could find the perfect time to strike.  Your skills also have powerups that change your abilities for an instance, along with a combo system that I could not exactly figure out how to use (due to lack of tutorial).  From what I understand, you build a resource called “Rage” which increases from being in combat.  Using these perks and combining these systems will make for interesting combat if one can use them effectively.  Your ghostly companion Katarina also returns to be your distraction for rampaging enemies and can be leveled up and geared to your desire.  And if you don’t really care about leveling her, she can just be your extra backpack (That’ll do, Mule.  That’ll do.)

“The combat in Van Helsing is responsive and very satisfying… abilities look and feel powerful, and have some very interesting mechanics.”

Skill and attribute points are given after every level up which you can assign manually.  The attributes section is standard fair, allowing you to increase body, dexterity, willpower and luck.  The skill tree is dense adding multiple paths for upgrading and changing skills.  The combinations can be mind numbing to the uninitiated and for a min/maxer, heaven.  Carefully planing and assigning points are a part of what makes ARPGs great and even if you slip up, you can re-spec your skills for a bit of gold in the main hub. 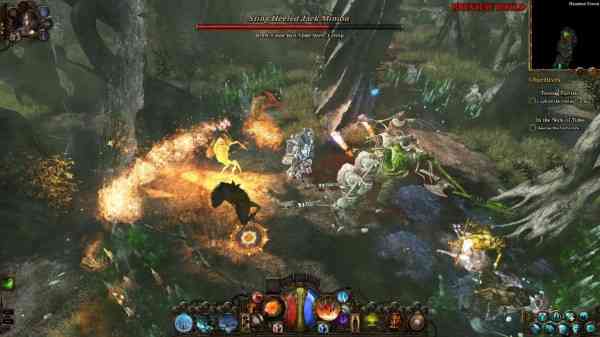 Inside the main hub you can find merchants, enchanters, crafters, a war table which you can send out advisers on missions to settle disputes, and even a chimera to send on hunts.  What rewards or ramifications the war table or chimera have on the game was not made clear but it’s looking like there will be plenty to do in this game besides slaying monsters.

The writing in game is quite humorous not taking itself seriously.  For instance, I had to advise a torturer on how to extract information from a cultist.  Upon selecting a choice, he will either recite a horrible poem or sing worse than a dozen howling cats.  I laughed and I thought it was refreshing.  There are also Easter Eggs aplenty and side missions galore for those who like to stray off the beaten path.

I’m excited for the full launch of the game and to really dig into the intricacies.  For those excited as well, the game releases very soon but we can’t let the cat out of the bag just yet!